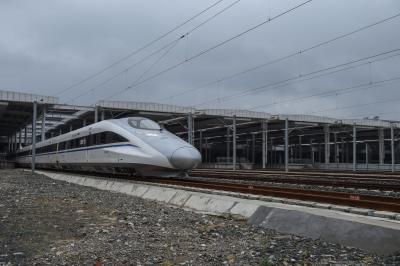 A train driver died and eight others were injured after a bullet train derailed in Rongjiang County, southwest China’s Guizhou Province, according to China State Railway Group.

Two carriages of the D2809 train from Guiyang to Guangzhou on Saturday came off the tracks that were hit by mud and rockslide as the train was about to arrive at the Rongjiang station, the company was quoted as saying by Xinhua news agency.

The injured people include one train attendant and seven passengers. They have been receiving treatment at a local hospital. A total of 136 other passengers have been evacuated, the company said.

An analysis of data on the train shows that the driver took emergency braking measures when he detected the abnormality of the railway line as the train was in a tunnel. The train then slid for more than 900 meters.

The anti-collision wall and the overall protection of the railway track structure prevented the overturn and falling of the train.