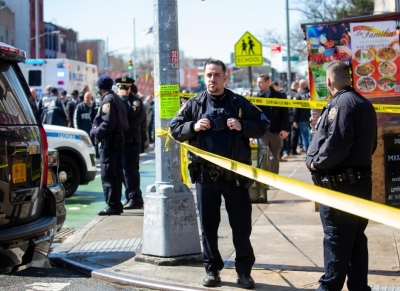 A heavily armoured gunman killed 10 people and injured three at a supermarket in Buffalo, New York, authorities said, adding that the US Department of Justice (DOJ) is investigating the incident as a hate crime.

The suspect is an 18-year-old white man, who was heavily armed with tactical gear and a helmet during the shooting on Saturday afternoon, Xinhua news agency quoted Buffalo Police Commissioner Joseph Gramaglia as saying to reporters late Saturday.

The gunman wore military-style clothing and body armour while carrying a rifle, according to reports.

He had a camera and the shooting was live streamed, according to Gramaglia.

Gramaglia said 11 victims are black while the other two are white.

The suspect drove to the Tops Friendly Market at around 2.30 p.m. and shot four people in the parking lot.

After shooting innocents inside the supermarket, the gunman once put the gun to his own neck but was persuaded by patrol officers to drop his gun, according to Gramaglia.

The gunman has been taken into custody and transported to Buffalo Police Headquarters.

The suspect will be arraigned on charge of murder in first degree, according to a district attorney.

In a statement on Saturday night, US Attorney General Merrick Garland said the DOJ “is investigating this matter as a hate crime and an act of racially-motivated violent extremism”.

He vowed to conduct “a thorough and expeditious investigation into this shooting” and to seek “justice for these innocent victims.”

Federal law enforcement agencies, including the FBI, are working with Buffalo Police Department and other partners, according to Garland’s statement.

Meanwhile, Buffalo Mayor Byron Brown said that “the shooter was not from this community. In fact, the shooter travelled hours from outside this community to perpetrate this crime on the people of Buffalo”.

The supermarket is located in a black-dominated community, which is around 3.2 km northeast of downtown Buffalo.

New York Governor Kathy Hochul, who was born in Buffalo, said she is on the way to to assist with the response to the shooting and a family unification site has been set up for family members of the shooting victims.

“We must do more to address the scourge of racism and anti-Semitism, and to pass commonsense gun safety measures to keep our communities safe,” said Senator Kirsten Gillibrand from New York State.

More than 28,000 people have died or been injured due to gun-related incidents in the United States this year, according to a database run by the nonprofit research group Gun Violence Archive.