17 US Congress members arrested at abortion rights demonstration outside Capitol 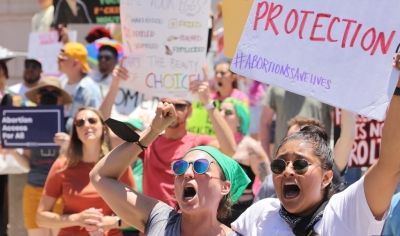 Seventeen members of US Congress were arrested outside the Capitol at an abortion rights rally.

The Capitol Police tweeted on Tuesday that demonstrators were blocking First Street, NE, and that “it is against the law to block traffic”, Xinhua news agency reported.

“We have already given our standard three warnings. Some of the demonstrators are refusing to get out of the street, so we are starting to make arrests,” they wrote.

A total of 35 people were arrested, reportedly including members of the Democratic Women’s Caucus.

The demonstration came more than three weeks after the US Supreme Court struck down the landmark Roe v. Wade, which eliminated the constitutional protection of abortion rights for women.

Abortion has been one of the most divisive issues in the US, with the ruling further splitting the nation.

Without Roe v. Wade, states are allowed to impose their own legislation on the medical procedure.

Last week, the US House of Representatives passed a pair of bills aimed at protecting access to abortion but they face little chance of clearing the evenly-divided Senate.