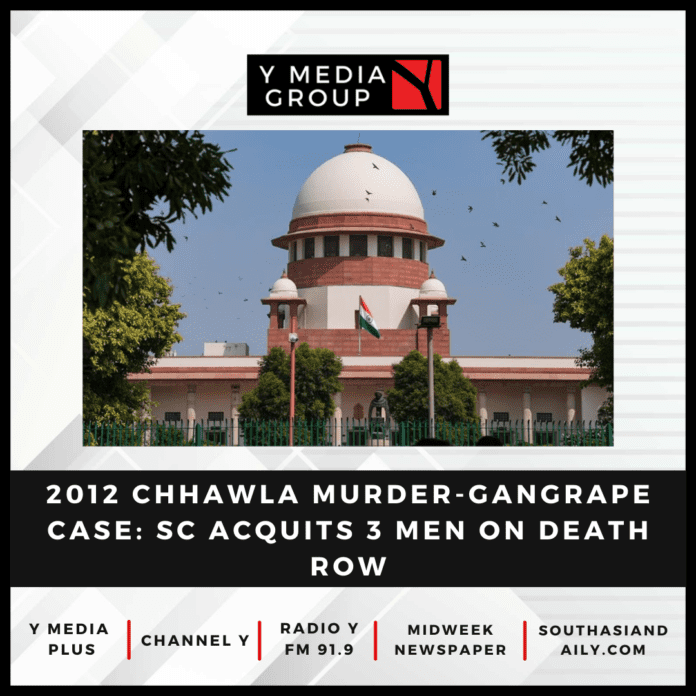 The Supreme Court on Monday acquitted three men on death row in the 2012 murder and gangrape of a 19-year-old woman in Delhi’s Chhawla area.

A bench, headed by Chief Justice U.U. Lalit and comprising Justices S. Ravindra Bhat and Bela. M Trivedi said: “The prosecution has to bring home the charges levelled against them beyond reasonable doubt, which the prosecution has failed to do in the instant case, resultantly, the court is left with no alternative but to acquit the accused, though involved in a very heinous crime.”

“The judgments and orders of conviction and sentence passed by the trial court and the High Court are set aside. The appellants-accused are acquitted from the charges levelled against them by giving them a benefit of doubt, and they are directed to be set free forthwith if not required in any other case. The appeals deserve to be allowed accordingly,” it added.

The top court set aside the Delhi High Court judgment, which upheld the conviction of the three men for rape and murder of the victim. The trial court, in 2014, while sentencing the accused to death had termed the case rarest-of-rare and the high court upheld this judgment. The accused moved the apex court challenging the high court judgment.

Justice Trivedi, writing the judgment on behalf of the bench, said the evidence with regard to the arrest of the appellants-accused, their identification, discoveries and recoveries of the incriminating articles, identity of the Indica car, the seizures and sealing of the articles and collection of samples, the medical and scientific evidence, the report of DNA profiling, the evidence with regard to the CDRs etc. were not proved by the prosecution by leading, cogent, clinching and clear evidence much less unerringly pointing the guilt of the accused.

“The court is constrained to make these observations as the court has noticed many glaring lapses having occurred during the course of the trial. It has been noticed from the record that out of the 49 witnesses examined by the prosecution, 10 material witnesses were not cross-examined and many other important witnesses were not adequately cross-examined by the defence counsel,” it said.

In the 40-page judgment, Justice Trivedi said: “We find that the appellants-accused were deprived of their rights to have a fair trial, apart from the fact that the truth also could not be elicited by the trial court. We leave it to the wisdom and discretion of the trial courts to exercise their powers under Section 165 of the Indian Evidence Act for eliciting the truth in the cases before them, howsoever heinous or otherwise they may be.”

The autopsy of the victim revealed that she was attacked with car tools, glass bottles, metal objects, and other weapons.

Police said one of the accused allegedly took revenge after the woman turned down his proposal. The prosecution had submitted that the woman, who belonged to Uttarakhand and worked in Gurugram’s Cyber City area, was abducted by the three accused from near her home while she was returning from her workplace. According to the prosecution, the woman’s mutilated and decomposing body was found in a village in Haryana’s Rewari. The woman’s parents filed a missing person report when she did not return home.