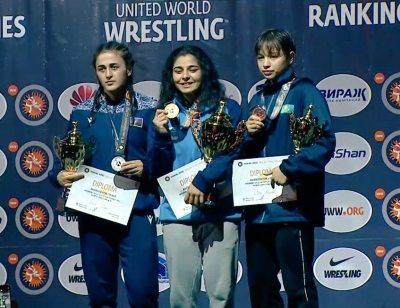 Sarita, a two-time Asian champion, won all her three bouts on the day via technical superiority.

Competing in the women’s 59 kg category, Sarita blanked Kazakhstan’s Diana Kayumova 11-0 in the opening round and then beat another local challenger Aizhan Ismagulova 12-2 in the semifinals. Up against the reigning under-23 European champion Zhala Aliyeva of Azerbaijan in the final, Sarita used her experience well to defeat her opponent 10-0 and bagged the gold medal.

The 27-year-old Sarita had suffered a narrow 2-1 loss to Anshu in the national trials last month and missed out on a place in the Indian team for the Commonwealth Games 2022.

On the other hand, Manisha lost her first match in the 65kg category but won the next four bouts on the trot to win gold. After being beaten by Elis Manolova of Azerbaijan via technical superiority, Manisha stormed back into contention with convincing wins over Kazakhstan’s Yelena Shalygina and Dinora Rustamova of Uzbekistan in the next two rounds.

Manisha continued her run in the semifinals against Ariukhan Jumabaeva of Uzbekistan with a commanding 10-0 win. In the final, the Indian wrestler set the record straight against Manolova with an 8-0 victory.

Meanwhile, Bipasha who was competing in the 72kg weight division, lost her second round-robin match to Zhamila Bakbergenova 5-7 to bag silver in a small three-woman field.

Another Indian wrestler Sushma Shokeen received a walkover from Khishigsuren Batbold of Mongolia in her opening round match in 55kg. Shokeen, who won bronze at the Asian championships last month, then beat Ainur Ashimova of Kazakhstan 10-8 before losing to Shokhida Akhmedova of Uzbekistan 0-9 to miss out on the gold medal match.