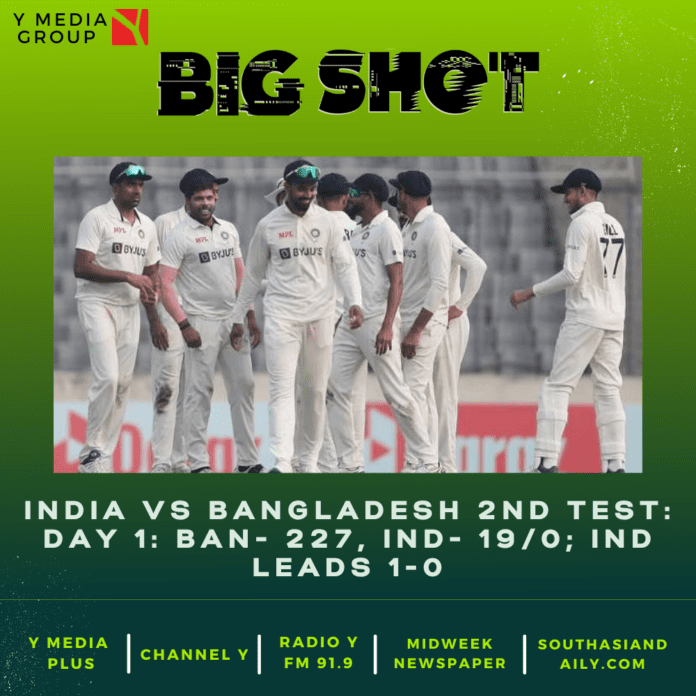 Umesh Yadav and Ravichandran Ashwin picked four wickets each to India in pole position on day one of second Test against Bangladesh at the Sher-e-Bangla National Cricket Stadium on Thursday.

Pushed into bowling first, India made use of conditions and pitch having seam movement, turn and extra bounce to bowl out Bangladesh for 227 in 73.5 overs, including losing last five wickets for 14 runs. For the hosts’, a returning Mominul Haque was the lone ranger with a stroke-filled and calm 84.

Each of the Bangladesh batters got starts, but barring Mominul, none could convert it into a big score. They had five partnerships in double digits, but none of them were able to touch a half-century.

Captain KL Rahul and Shubman Gill held their nerve towards the end of the first day to be not out on three and 14 respectively, taking India to 19/0 in eight overs at stumps, trailing Bangladesh by 208 runs.

Apart from Umesh and Ashwin, Jaydev Unadkat picked two wickets and impressed with his accuracy and ability to extract extra bounce on his return to Test cricket after 12 years, especially after he was included in place of Kuldeep Yadav, who was the player of the match in India’s 188-run victory at Chattogram.

When India came out to bat, Taskin Ahmed found pace, and some seam movement to challenge Rahul and Gill. Gill had some struggles early on, getting lucky on edges, especially the one going past the stumps.

Though he launched a six over Shakib Al Hasan’s head, Gill has his share of troubles when the left-arm spinner was on and was able to deceive Rahul too. Rahul, the Indian skipper, was beaten on defence by Taskin and survived an lbw decision via DRS.

In the next over, he was rapped on pads by Shakib, but survived that as replays showed ball would miss leg-stump. Four balls later, the day would come to a close, which was in India’s favour.

In the morning, India gave Zakir Hasan a reprieve when Mohammed Siraj dropped a diving catch at fine-leg off Umesh. Siraj and Umesh were getting bit of lateral movement, and were beating the edge of Zakir and Najmul Hossain Shanto constantly, even squaring them up on a few occasions.

Due to Siraj and Umesh making the ball talk, Zakir and Shanto got some streaky boundaries, flying off the outside edge through the region between slip and gully. Unadkat got the ball to bounce a bit more, hit the batters on their gloves couple of times and got the ball to come in from outside off stump.

India’s perseverance finally paid off when Unadkat’s short of length ball and seaming in had the extra bounce and took the glove edge off Zakir to fourth slip, giving the left-arm pacer his first Test wicket.

In the next over, Shanto offered no shot to a full delivery from Ashwin that came back in to trap the opener lbw. Mominul, back in the eleven for Bangladesh, brought out the drive and flick against overpitched deliveries.

Shakib used his feet well to loft Ashwin over extra cover for four and then smacked a six over deep mid-wicket. He went on to survive a stumping chance down leg off Ashwin before the session came to an end. Post lunch, India had success straightaway as Shakib hit straight to mid-off off Umesh.

India were able to keep Mominul and Mushfiqur Rahim quiet, before the floodgates opened when the latter smacked Ashwin for a hat-trick of boundaries through cover, mid-on and point. Mominul joined the fun by flicking Unadkat twice through mid-wicket for successive boundaries.

Rahim greeted Axar Patel with a sweep through short fine leg, before departing for 26 right after drinks break. A ball from Unadkat that held its line from short of good length and got to come in with the angle, taking the edge on a forced poke behind to keeper.

Mominul increased his risk-taking when he fiercely cut Unadkat over the slip cordon and got his fifty two balls later with another slash through backward point. Das got going with a punch and pull off Siraj for four and six, before cutting Axar for a boundary.

His promising stay ended when Ashwin deceived him on flight and picked out short mid-wicket to perfection. Mehidy and Mominul got another boundary each while India burnt another review as the session came to a close.

In the final session, Mehidy hit a couple of boundaries before nicking behind to Pant off Umesh. The pacer had another wicket in quick succession when he got one to come in and trap Nurul Hasan lbw. Umesh had his fourth wicket when Taskin Ahmed went for a drive and leading edge was snapped by point.

Ashwin came in and had Mominul chasing a wide carrom ball outside the off-stump. But the ball sneaked in and brushed his glove as he tried to leave late, and was caught by Pant. A ball later, Ashwin got his fourth wicket when Khaled Ahmed whacked a full toss straight to deep mid-wicket.