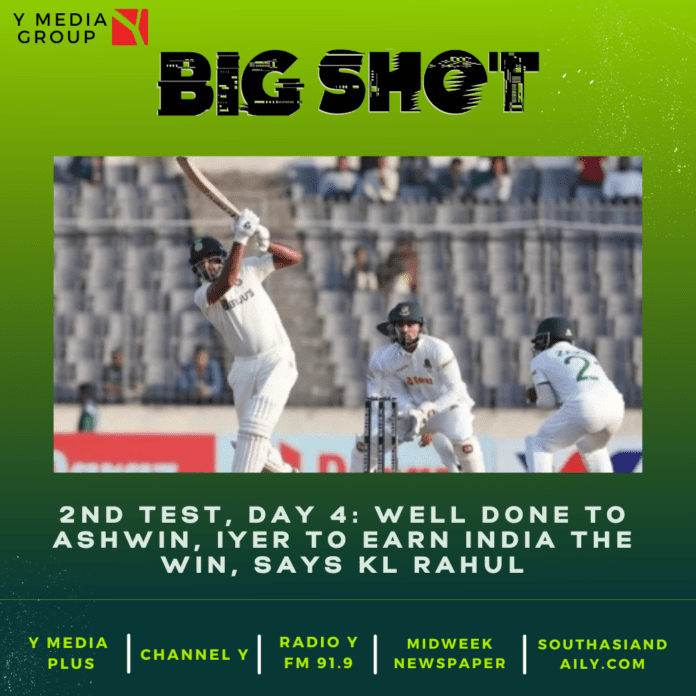 India captain KL Rahul was one relieved man after Ravichandran Ashwin and Shreyas Iyer stitched a crucial 71-run partnership for a narrow three-wicket victory over Bangladesh at Mirpur, Dhaka, on Sunday, saying the duo did well to earn the visitors’ a victory.

On day four, India was in a spot of bother at 74/7. But Ashwin (42 not out), along with Iyer (29 not out), defended solidly and brought out a flurry of boundaries in a magnificent 71-run partnership to take the visitors’ over the line in a chase of 145 and secure a 2-0 series sweep.

“You just trust the guys in the middle. There’s always belief but there were nerves, we are human. But we trusted the batters out. Today, Ashwin and Shreyas did it with ease and style. Well done to them to earn India the win.”

“We never thought it’d be a cakewalk, thought we need to grind and work hard for runs which Bangladesh did. It was tougher with the new ball. We lost more wickets than we’d have liked. We’ve made mistakes but will look to learn and hopefully put a better performance if a similar situation arises in the future,” said Rahul in the post-match presentation ceremony.

Rahul was also pleased with how the bowlers clicked in unison in the two-match series victory. “Happy with our bowling depth in the last 6-7 years. The series wins say a lot about how well we’ve groomed our pace attack. Ashwin and Axar have also done really well.”

“Umesh put his hands up, Jaydev came in after a long time but bowled phenomenally well and probably deserved more wickets than he got. But the pressure helped Ashwin and Axar capitalise.”

Bangladesh captain Shakib Al Hasan appreciated the fight shown by Ashwin and Iyer while wishing that 2023 would be a better year for his team in terms of results. “Everyone contributed, we’ve played well in this venue. Shreyas and Ashwin batted well under pressure. We needed one more wicket. We can think of lots of ifs and buts but happy with the way we thought.”

“It was unfortunate I couldn’t bowl well in the first Test, but happy to have done well here. The mindset of the team makes me happy. Hopefully, we get better results next year.”