3 million people in Punjab addicted to drugs, but state has dropped to No. 3 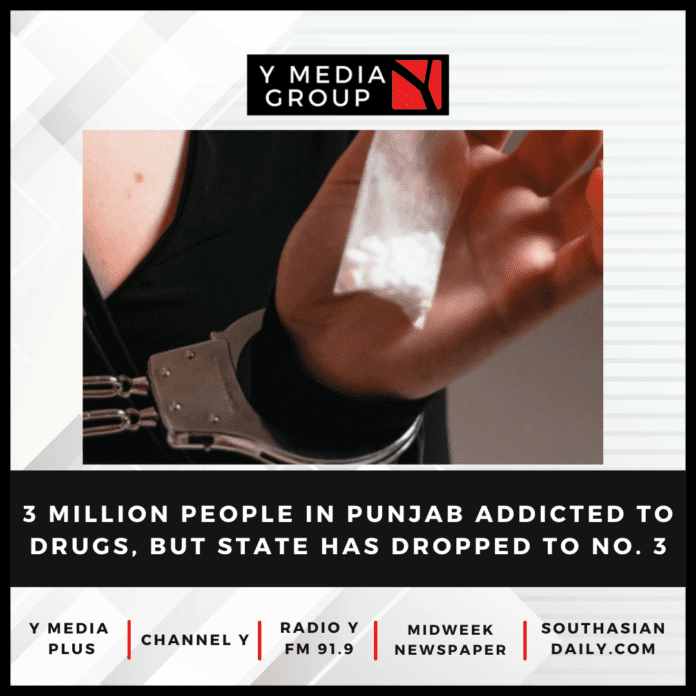 Once at the top of the list in the use of drugs and even termed ‘Udta Punjab’, drug smuggling in Punjab remains a much-debated social, criminal and political issue.

Despite the Punjab government forming a Special Task Force (STF) to curb the menace, it however still manages to haunt the state.

But the state has now dropped to the third place with regards to the use and trafficking of drugs, according to the National Crime Record Bureau ‘s(NCRB) report released this year.

The report revealed that Uttar Pradesh has now occupied the top spot with 10,432 FIRs registered under the NDPS Act, followed by Maharashtra(10,078) and Punjab (9,972).

The second edition of the book, ‘Roadmap for Prevention and Control of Substance Abuse in Punjab, released by the community medicine department of Chandigarh’s Post Graduate Institute of Medical Education and Research (PGIMER) this year stated that more than 3 million people, or around 15.4 per cent of the population of Punjab, are currently consuming drugs.

The drug trade in Punjab is estimated annually to the tune of Rs 7,500 crore.

Several households have lost their family members to the drugs scourge. Maqboolpura is known as the village of orphans and widows, as majority of drug abuse victims hail from there.

Amid rising concern, the Supreme Court this month had directed the state government to keep a check and be serious about the drug menace.

In August this year, after carrying out month-long cordon and search operations in drug-affected areas besides patrolling vulnerable routes across the state, Punjab Police arrested as many as 2,205 smugglers, including 260 top criminals.

A total of 1,730 FIRs have been registered, of which 145 are related to commercial quantity.

The police have also recovered 30 kg heroin, 75 kg opium, 9 kg marijuana and 185 quintals of poppy husk, 12.56 lakh tablets/capsules/injections/vials of pharma opioids from across the state.

Being situated near the Golden Crescent crossroads (Afghanistan, Pakistan and Iran), also called the ‘Triangle of Death’, Punjab is a lucrative market for drug gangs.

Ironically, it doesn’t produce opium, cannabis or their derivatives nor does it manufacture psychotropic drugs. Punjab’s ‘chitta’, a synthetic heroin derivative, has upended the lives of people across class, gender, age and place.

Punjab alone accounts for over one-fifth of the total recoveries of heroin in the country. Opium is smuggled into Punjab from Sri

Ganganagar and Hanumangarh districts in Rajasthan and Kathua in Jammu and Kashmir.

Heroin is smuggled into India through Pakistan. More than 9,500 cases have been registered and 13,000 arrested under the NDPA Act by the Punjab Police this year so far.

Synthetic drugs such as amphetamine and ecstasy come from Baddi in Himachal Pradesh and Delhi, said an official.

The ‘Udta Punjab’ scenario is reflected in a study by the Institute for Development and Communications, Chandigarh, which concluded that 75.8 per cent of the surveyed addicts lived in the border districts and were aged between 15-35 years.

For over a decade, the Congress and Shiromani Akali Dal pummeled each other on the state’s drug crisis.

The BSF was also dragged into the fight and ‘narco politics’ became a term of reference in the state’s twisted drug vocabulary.

In 2014, a retired IPS officer claimed that many politicians were involved in the racket either directly or through their cohorts with police backing.

Narcotics are concealed in onion-laden trucks bound for Punjab from Gujarat or packed along with cumin seeds to suppress the smell.