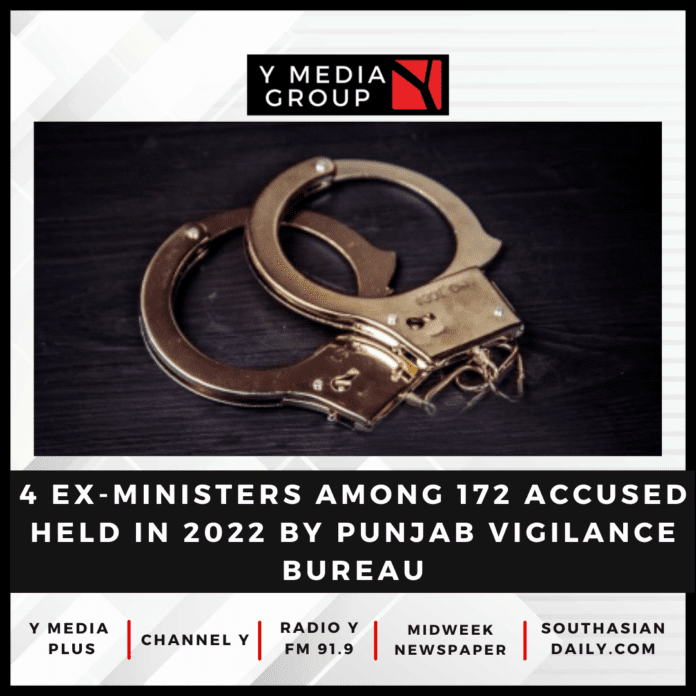 He said the arrested 172 accused included 83 in 65 trap cases and 89 in 64 online complaints in one year. The bureau has set a record in registration of bribery cases, arrests of accused in corruption, registration of criminal cases and arrests made thereof, besides filing of vigilance enquiries against suspects involved in these probes as compared to the last two years.

Kumar said the Bureau has adopted a multi-facet approach to corner the bribe seekers and to generate awareness among the public. During the year, 30 personnel of Punjab Police, 13 of the Revenue Department, five of the Power Department and four of the local bodies were caught red-handed while taking bribes from January 1 to December 31, 2022.

Apart from this, 103 vigilance enquiries have also been registered against 139 suspects to probe corruption complaints which include 35 gazetted officers, 58 NGOs and 46 private persons in the last year.

Besides, two cases of disproportionate assets were registered against one gazetted officer and an NGO.

Two NGOs have been dismissed from their services by their respective administrative departments due to conviction in various courts, he added.

He said special courts have sentenced two gazetted officers, 18 NGOs and 10 private persons accused in 19 vigilance cases registered under the Prevention of Corruption Act and awarded imprisonments up to five years.

The Chief Minister’s Anti-Corruption Action Line received 3,72,175 complaints last year, out of which 6,407 complaints were received with audio or video recordings and 294 complaints pertaining to the vigilance bureau.