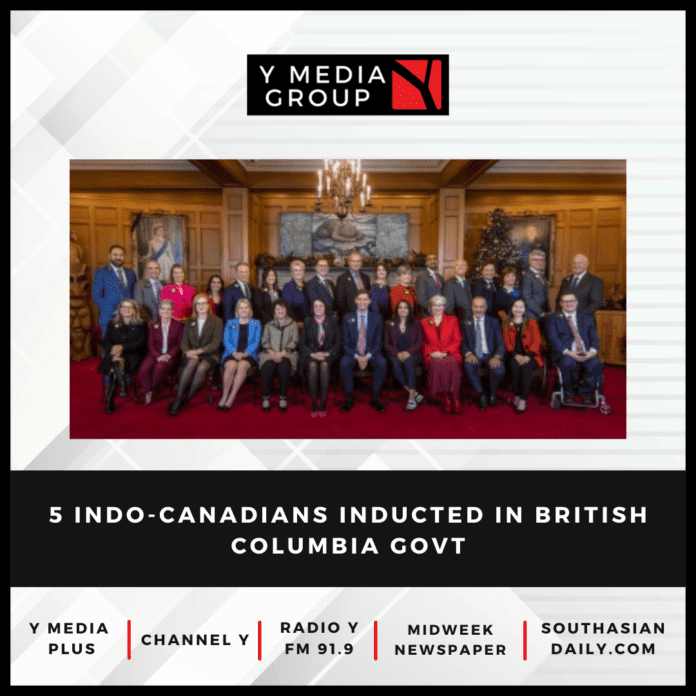 Five Indo-Canadians with roots in Punjab have been sworn in as ministers in a recent cabinet reshuffle by British Columbia (BC) Premier David Eby. Harry Bains, Nikki Sharma, Jagrup Brar, Rachna Singh and Ravi Kahlon recently took oath at the Government House in BC capital Victoria.

Bathinda-born Brar was inducted as Minister of State in the New Democratic Party (NDP) government of British Columbia in Canada on Wednesday. He was first elected as an MLA in Surrey in 2004, and served until 2013. He was elected again as the MLA for Surrey-Fleetwood in 2017 and 2020.

“I am honoured to be appointed as the Minister of State for Trade. Thank you to Premier @Dave_Eby in putting your trust in me and my cabinet colleagues. I’m excited to get to work for the people of British Columbia!” Brar tweeted after his appointment.

In India, Brar was a member of the national basketball team and earned a master’s degree in Philosophy. He then moved to Canada to study Public Administration.

A three-time MLA from Surrey Green Timber, Rachna Singh became the first South Asian woman to be named Education and Childcare Minister of British Columbia. She is the second Punjabi after Moe Sihota to handle the portfolio. Rachna moved from India to Canada in 2001 and has worked as a drug and alcohol counsellor, a support worker for women facing domestic violence, and a community activist.

Niki Sharma, who was appointed as Attornery General, has worked across BC as an advocate on climate policy and reconciliation, and has been recognised for her advocacy to combat racism.

“It is an honour of a lifetime to serve B.C. as the Attorney General. I am so grateful to Premier @Dave_Eby and to all of you for your kind words of support. I commit to doing the best job I can for the people of this province,” Niki tweeted.

Harry Bains, who was reappointed as Minister of Labour, said he wants to make “BC workplaces the safest in the country”.

“I am so grateful to be sworn in once again as Minister of Labour this morning. We have accomplished big changes in BC such as bringing in paid sick leave, raising the minimum wage, repatriating our healthcare workers, etc. We still have so much more to do,” tweeted Harry, who has an extensive background in community service.

Ravi Kahlon was named Minister of Housing and Government House Leader. He previously served as the Parliamentary Secretary for Forests, Lands, Natural Resource Operations and Rural Development, where he championed the use of mass timber and innovation in BC’s forest sector.

A two-time Olympian, Victoria-born Ravi played field hockey for Team Canada at the 2000 and 2008 Olympics. Prior to his election as an MLA, Ravi spent seven years in banking, and another six years working with the New Democrat Caucus as Director of Stakeholder Relations.