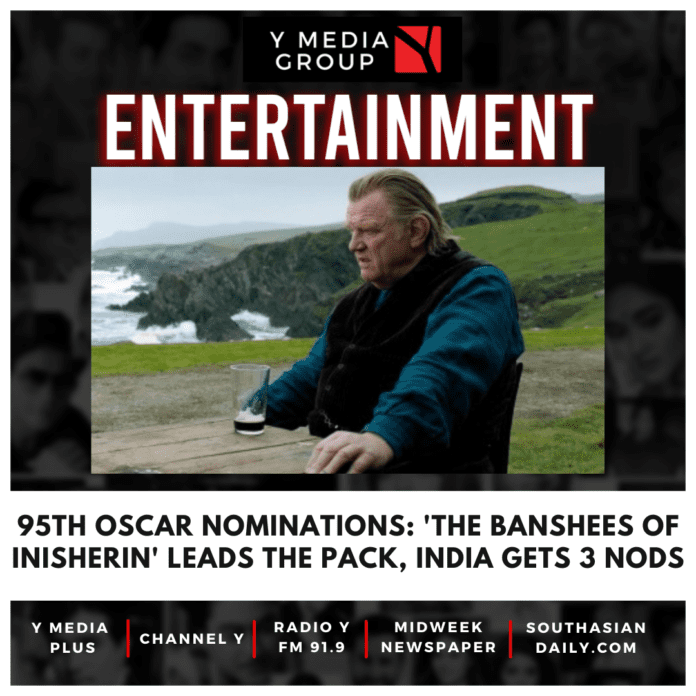 The nominations for the upcoming 95th edition of Academy Awards were announced on Tuesday by hosts Riz Ahmed and Allison Williams, with ‘The Banshees of Inisherin’ leading the pack with as many as nine nominations.

Competing for the best picture are ‘All Quiet on the Western Front’, ‘Avatar: The Way of Water’, ‘The Banshees of Inisherin’, ‘Elvis’, ‘Everything Everywhere All at Once’, ‘The Fabelmans’, ‘Tar’, ‘Top Gun: Maverick’, ‘Triangle of Sadness’ and ‘Women Talking’.

The 95th Academy Awards is set to be presented at the Dolby Theatre in Los Angeles on March 12. Jimmy Kimmel will be seen back as the host, after previously leading the awards show in 2017 and 2018. Last year, the Oscars returned to a host format with Amy Schumer, Wanda Sykes and Regina Hall, after going host-less the previous two years due to the Covid-19 pamdemic.

95th Oscar Nominations: A Hat-trick Within The Grasp Of ‘Naatu Naatu’

95th Oscar Nominations: A Hat-trick Within The Grasp Of ‘Naatu Naatu’