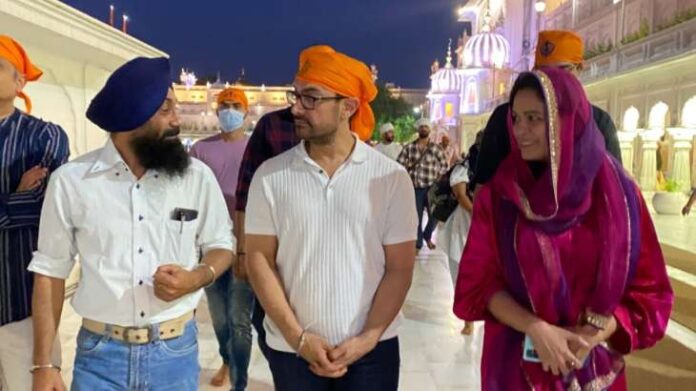 Aamir Khan starrer Laal Singh Chaddha is all set to release on Thursday, August 11. While the clock is ticking, Aamir Khan and Kareena Kapoor are both working tirelessly to promote their film. Amidst the hectic schedule, Aamir took a break to seek blessings at the golden temple in Amritsar before the film goes out to the world.

While the audience has been anticipating the release of the Aamir Khan starrer for a long time, the Laal Singh Chaddha team had made it a point to drop a few glimpses from the film now and then. From character introduction to releasing audio versions of the music and then later releasing music videos, the journey of bringing Laal Singh Chaddha in bits and pieces to the audience has been full of love, depth, and warmth.

Meanwhile, ahead of the release, the team of Laal Singh Chaddha is basking in the success of their soundtrack which has been time and again termed the most successful music album of the year 2022. From ‘Kahani’, ‘Phir Na Aisi Raat Aayegi’, ‘Tur Kalleyan’ to ‘Mein Ki Karaan?’ and many more, all the songs from the film have managed to touch the hearts and souls of the listeners, no wonder why the playlist is being celebrated nationwide.

‘Laal Singh Chaddha’, produced by Aamir Khan Productions, Kiran Rao, and Viacom18 Studios. The film marks Aamir’s comeback to the big screen after four years. It also stars Kareena Kapoor Khan, Mona Singh, and Naga Chaitanya Akkineni. Naga Chaitanya will be making his Bollywood debut with this film. It is an official remake of Forrest Gump. The film is helmed by Advait Chandan and it will be released in theatres on August 11, 2022. The Aamir Khan starrer will officially launch on OTT platforms six months after its theatrical release. Laal Singh Chaddha will have a clash with Akshay Kumar’s Raksha Bandhan. It will be interesting to see how two major films fare at the box office.