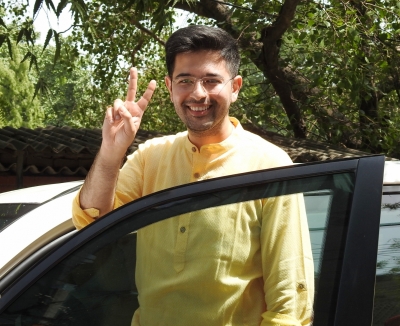 Amid criticism by the Opposition, the Punjab government, led by leader Bhagwant Mann, on Monday appointed AAP Rajya Sabha member Raghav Chadha as Chairman of a state advisory committee on matters of public interest.

The opposition parties had been saying that the Chief Minister would make Chadha the de facto Chief Minister by making him the committee’s Chairman to take part in official meetings.

A notification to constitute the committee, comprising a Chairman and members, who will not be entitled to any compensation, remuneration, or perks, was issued last week.

Responding to the appointment, state Congress chief Amarinder Singh Raja Warring slammed the government and accused Chief Minister Mann of ceding too much power to Chadha through the committee. He said appointing Chadha as Chairman is tantamount to making him the Chief Minister of Punjab.

“Punjabis did not vote for this change. It seems @BhagwantMann ji has handed over the Punjab government on contract,” said Raja Warring in a tweet.

BJP leader Manjinder Singh Sirsa said as predicted and plotted by Delhi Chief Minister Arvind Kejriwal, Chadha made the chairman of an advisory committee to the Chief Minister Mann.

“Back door entry to Raghav Chadha to be super CM! Punjabis won’t tolerate surrender of Punjab’s sovereignty to Delhi, Mann Sahab. We will ensure he is removed ASAP!” Sirsa tweeted.

As per the notification about the advisory body, “The Chief Minister of Punjab has undertaken a review of the working of government at various levels and is of the view that a body (temporary in nature) is required to tender advice to the government of Punjab on matters of public importance pertaining to public administration.

“Therefore, it has been decided to constitute a temporary committee to advise the government of state of Punjab on matters of public importance pertaining to public administration as and when such advice is sought from it.”