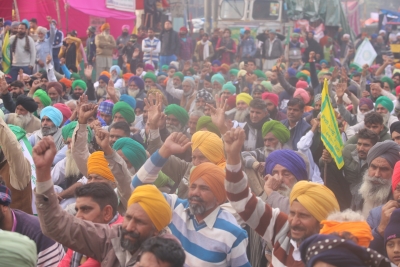 As the year-long protest against the Centre’s farm laws at the Delhi borders ended in November last year with the revoking of the three Central farm laws, hundreds of Punjab farmers on Tuesday gathered on the outskirts of the state capital demanding compensation of Rs 500 per quintal for those who suffered losses due to early onset of early summer.

Their other prominent demands include minimum support price for the purchase of maize, basmati, and moong (pulses) that the government has assured, ending staggered paddy cultivation from June 18, and that prepaid electricity meters not be installed.

They threatened to break the barricades set up on borders on Wednesday to march to the Chief Minister’s residence in Chandigarh if their demands are not met.

In the morning, tempers of the protesting farmers ran high as Chief Minister Bhagwant Mann failed to meet leaders of 16-member Sanyukt Kisan Morcha over their demands and left for Delhi.

They refused to meet government functionaries deputed by the Chief Minister’s Office to hear their grievances.

“This scorching heat wave will not dampen the morale of farmers and they will not leave the protest sites at Chandigarh borders till their demands are fulfilled,” a protester said.

Farmer leaders said while the increasing heat wave is not posing a challenge as they have equipped themselves with all necessary facilities like coolers or provision of cold drinking water.

Bharti Kisan Union (Sidhupur) state President Jagjit Singh Dallewal told the media that they have a charter of 15 demands that comprise to allow the farmers to carry out early paddy transplantation from June 10 instead of June 18 as decided by the government.

He said though the minimum support price (MSP) on 23 crops was announced by the government, the farmers were getting it only on wheat and paddy.

“Farmer unions have two rounds of meeting with the government, but the government so far failed to address their demands. So we have been forced to start the protest from today,” he added.

However, there was no report of any untoward incident from the protest site. Emergency medical services were exempted from the blockade.

But traffic was hit badly as farmers and farm labourers and activists of political parties squatted at entry points.

“The way @BhagwantMann left the farmers in lurch and unattended by leaving for Delhi to meet @ArvindKejriwal it shows how much concern he has for the farmers of Punjab! It means all the AAP support to farmers agitation in Delhi was politically motivated and for political gains!” he tweeted.