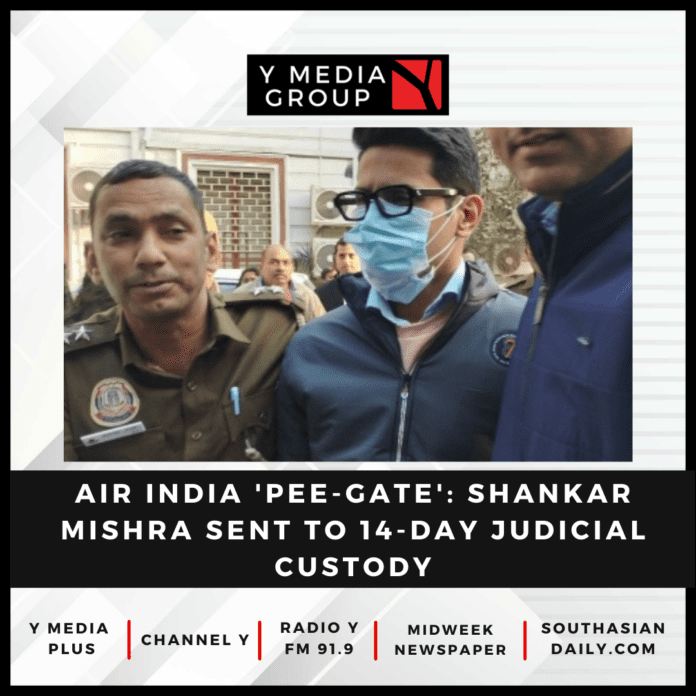 The Patiala House court on Saturday sent Shankar Mishra, who’s accused of urinating on an elderly female co-passenger in a drunken state on a New York-New Delhi flight in November last year, to 14-day judicial custody.

The police had moved the court seeking three-day remand of Mishra. However, the court sent the accused to 14-day judicial custody.

The court noted that prime facie, it seems that the accused was deliberately avoiding joining the investigation.

Metropolitan Magistrate Anamika said that physical presence of the accused is not required to question other witnesses and statements under Section 164 CrPC can be recorded without taking him into police custody.

“Just because there is public pressure, don’t do this. Go by the law. Perusal of records shows that the accused was deliberately avoiding joining the investigation. In order to make further investigation, physical presence of the accused is not required during the recording of statements of the flight’s crew members,” the court observed.

During the arguments, the court asked the police as to why Mishra’s police custody is required. The public prosecutor submitted that Mishra was not cooperating with the probe.

“The police arrested Mishra from Bengaluru. Investigation in the case is still on, as the police need to interrogate a lot of people,” the public prosecutor said.

However, the judge said that Mishra’s custody would not be required to examine the crew members and other witnesses.

“There is no ground of police custody,” the judge said.

Meanwhile, the police also submitted that the cabin crew did not handle the situation properly and hence they are also complicit in the alleged offence.

Mishra also filed for bail separately, on which the court issued a notice to Delhi Police. The bail plea will be heard on January 11.

The court even refused to hand over a copy of the FIR to the advocate appearing for the complainant.

“We do not want to give a copy of the complaint to anyone but the complainant,” the court noted.

Earlier, the lawyers of Mishra said that a settlement was done and compensation was paid to the victim woman.

According to the statement issued by Mishra’s lawyers on Friday, the WhatsApp messages between the accused and the lady clearly show that the accused had got the clothes and bags of the victim cleaned on November 28, and the same were delivered on November 30.

“The lady’s persisting grievance was only with respect to the compensation paid by the airline for which she raised a subsequent complaint on December 20, 2022,” the statement read.

As per statement, Mishra had paid the compensation as agreed upon between both parties through PayTM on November 28, but the money was returned by the woman’s daughter on December 19.

“The accused has full faith in the judicial system of the country and will cooperate with the investigation process,” it added.

Mishra has been booked under Sections 510 (misconduct in public by a drunken person), 509 (insulting the modesty of a woman), 294 (sings, recites or utters any obscene song, ballad or words, in or near any public place), and 354 (intending to outrage modesty) of the Indian Penal Code as well as a section of the Aircraft Rules Act in a case registered at the IGI Airport police station.