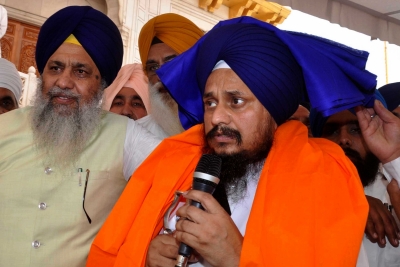 After the Punjab government withdrew half of his security cover, Akal Takht Jathedar Giani Harpreet Singh on Saturday said he asked his office to send the remaining security personnel to the government as he “does not need” them.

At the same time, the Shiromani Gurdwara Parbandhak Committee (SGPC) deployed its armed men in the security of the jathedar, who this week asked Sikhs to keep a licensed weapon in view of the “uncertain times”.

In an order, the government withdrew or curtailed the security of 424 VIPs in the state. They largely include former legislators, heads of various “deras” and police officers.

The head of Akal Takht, the highest temporal seat of the Sikhs, is among them.

Looking at the sensitivity of the case, the government later restored his security but he declined.

Giani Harpreet Singh had a security cover of six police personnel. Three were withdrawn after the order.

Responding to the withdrawal of security, the jathedar said: “I don’t need the security. “Khalsa Panth and the Sikh youths are there for our security.”

“After the controversy, the Punjab government restored the security of the Akal Takht jathedar. However, the jathedar is adamant on his decision and refused to take the government security,” an official with the SGPC said.

The security of those that have been curtailed include heads of Dera Radha Soami Satsang in Beas; Dera Divya Jyoti Jagriti Sansthan in Noormahal, and Shahi Imam Punjab, Mohammad Usman Ludhianvi.

In a video message to the Sikh community on May 23, the Akal Takht jathedar had said: “Every Sikh should try to keep licensed weapons, because the time that is coming, and the circumstances which are going to prevail, demand it. The Sikh youth should be skilful in gatka (Sikh martial art) and shooting.”