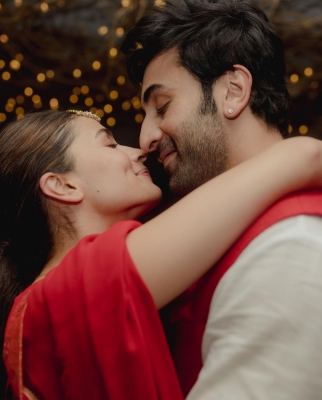 On her one month wedding anniversary with actor Ranbir Kapoor, actress Alia Bhatt shared a string of unseen pictures on social media to celebrate the occasion.

On May 14, the couple celebrated one month of their wedding. On the occasion, Alia took to social media to share unseen wedding pictures with hubby Ranbir.

In the images, the star couple are all smiles in the pictures. She captioned the pictures with balloon, dancing and cake emojis.

The first picture is from their post-wedding celebrations, the two are looking lovingly at each other. In the second image, which is from their reception, Ranbir is giving a back hug to Alia.

Alia and Ranbir first started dating during the shoot of their upcoming film ‘Brahmstra’ in 2018. The two currently await the release of the movie, which is directed by Ayan Mukerji.

Ranbir and Alia got married in an intimate wedding on April 14.