Ally cautions Imran Khan not to speak against Gen Bajwa 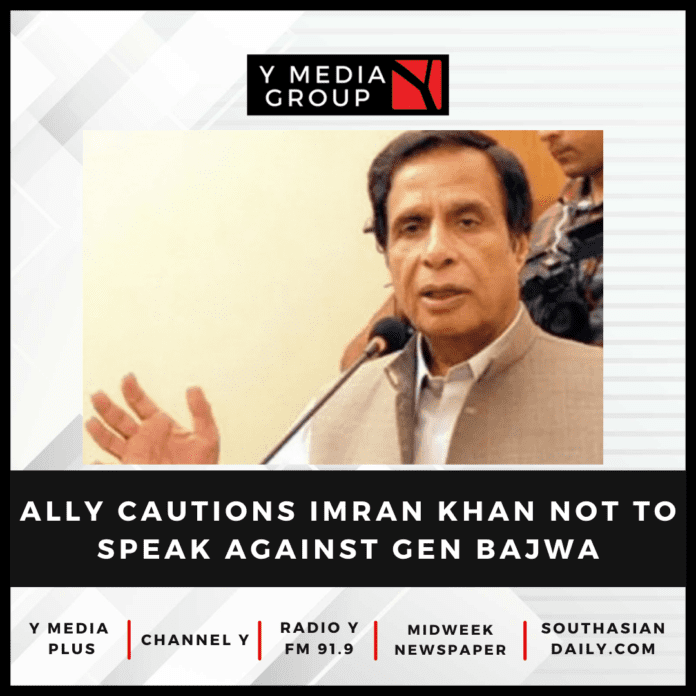 Elahi said that he and his party would be the first to defend Gen Bajwa if anything is said against him.

“I felt very bad when Khan was speaking against Gen Bajwa,” the Chief Minister said, speaking in an informal conversation with journalists, The News reported.

Referring to Khan’s criticism against the ex-army chief in an address to party workers and supporters on Saturday, he said that the former COAS was a “benefactor” and nothing should be said against benefactors.

“Gen Bajwa (retd) has many favours on him (Khan); therefore, the favours shouldn’t be forgotten,” the Punjab CM reminded the PTI chief, The News reported.

He said that they are allies of the PTI instead of opponents, but they can’t forget the favours of their “benefactors”.

“We agreed immediately when Imran Khan asked to dissolve Punjab Assembly,” he added.

On Saturday, Khan in his address to PTI workers criticised the former army chief, saying that he “foresaw the removal of his government” and was aware that some elements wanted to impose Shehbaz Sharif as the Prime Minister, The News reported.

The former Premier was flanked by Parvez and Khyber Pakhtunkhwa CM Mahmood Khan.

“General Qamar Javed Bajwa told me that he did not want this (Shehbaz becoming PM to happen). So who is responsible? Will anyone tell me this? Gen Bajwa would tell me that the (incumbent rulers) are corrupt.”