Almost half of Canadians think immigration target too high: Poll 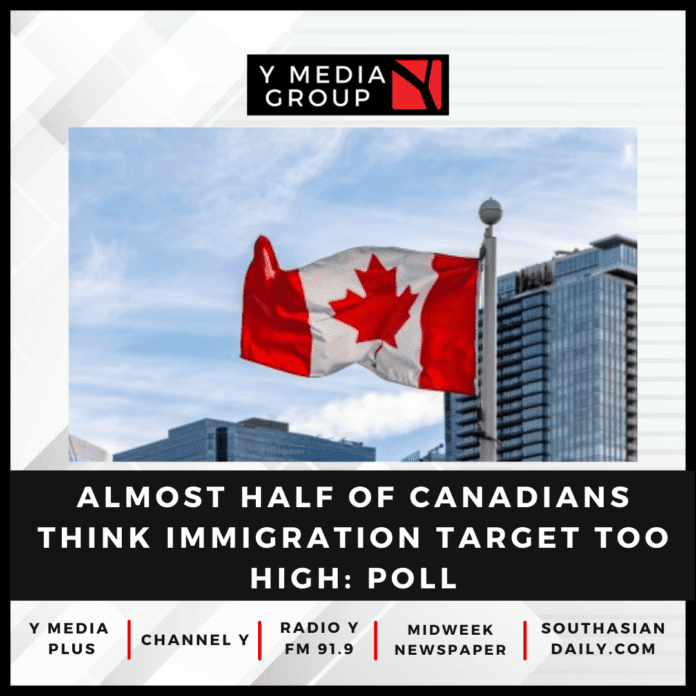 Even as Canada set a record by admitting 431,645 new permanent residents in 2022, almost half of Canadians think that the government’s target of 500,000 immigrants a year is too high, according to a recent poll.

Forty-nine per cent of Canadians think the government’s immigration plan will admit too many immigrants to the country, according to market research and analytics company Leger.

According to the Immigration Levels Plan 2023-2025 released last year, Canada aims to welcome 465,000 new immigrants in 2023 to address severe labour shortage in the country.

The target for 2025 is to invite 500,000 new immigrants, which is almost 1.5 million new immigrants coming to the country over the next three years.

The web poll, which covered 1,537 Canadians, said “75 per cent of Canadians are concerned the immigration plan will result in excessive demand for housing and health and social services”.

However, according to Immigration Minister Sean Fraser, immigrants will themselves provide the labour needed to build the housing stock they need.Fraser says that newcomers — apart from filling up labour shortages — “bring new perspectives and talents to the community, and enrich society as a whole”.

As per a new housing law, which went into effect on January 1, Canada has prohibited “the purchase of residential property by non-Canadians” for a two-year period.

This has been done to mitigate the country’s rising home prices that reached new heights during the Covid-19 pandemic, spurred partly by low interest rates and higher disposable incomes.

Meanwhile, the median after-tax income of Canadians increased only 9.8% between 2015 and 2020, according to the BBC.

The Immigration, Refugees and Citizenship Canada (IRCC), processed a record 5.2 million applications for permanent residence, temporary residence and citizenship in 2022.

Roughly 75 per cent of Canada’s population growth came from immigration, mostly in the economic category, according to IRCC.