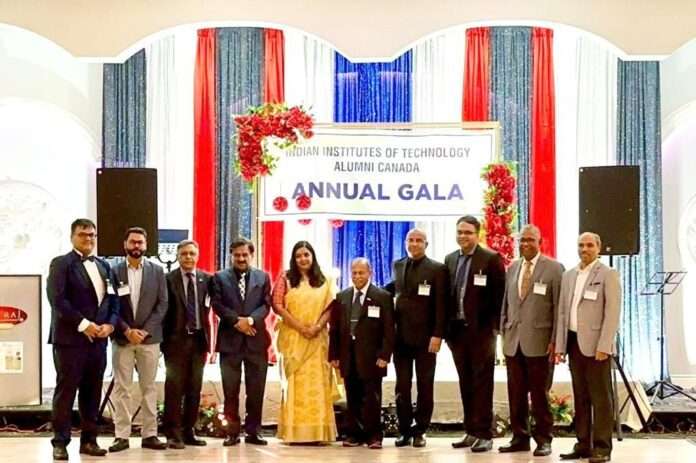 Coming after Covid, the Annual Gala of Indian Institute of Technology Alumni Canada (IITAC) was celebrated with great enthusiasm by its members on Saturday, November 19, 2022, at Natraj Banquet Hall in Mississauga, Ontario.  The event had over 300 attendees, including City Councillors, Entrepreneurs, Industry Leaders, Past Presidents of the IIT Alumni Association, opinion makers and Leaders of the Indian diaspora.

IIT ALUMNI CANADA (IITAC) is an Association of graduates from 23 Indian Institutes of Technology (IITs). The Association is a ‘Not-for-profit’ organization registered in Ontario, Canada, with Regional Chapters in Calgary, Vancouver, and Ottawa. IIT Alumni are recognized worldwide as “thought leaders” and have established a reputation for their entrepreneurship, innovation, and management of technology skills. IITAC has a membership about two thousand strong across Canada. Activities of IITAC include providing support and mentorship to IIT graduates including those new to Canada to settle down.

In US, the House Resolution 227 in 2005 that was adopted unanimously by the US House of Representatives heaped kudos on the IITs and the contributions of its alumni to the American society and the country’s economy.  Name any large high-tech company like Google, Microsoft, Adobe, IBM, Palo Alto Networks, and Twitter are today headed by a CEOs who grew up and studied at IITs in India. Wonderful to watch the amazing success of Indians in the technology world. Canada is not behind with IITian Prem Vatsa leading the list of richest and successful businessmen.

The IIT Alumni Canada organizes several events throughout the year for its membership and for other Canadian professionals. These events provide opportunities for the members to disseminate knowledge, network and socialize. The themes of the events include technical conferences, lecture events with participation by industry experts and academia, as well as fun filled family events.  The association also carries out a program IFI (IITians for IITians) to support newcomers into Canada. The program works by identifying mentors who are in a position to provide help, and mentees seeking support. The support could be in the form of networking, job leads, information and help required in settling down at a new place.

IITAC Annual Gala evening this year was full of entertainment including a variety of professional performances and participation from IITAC members as well.  Members were involved in a networking session before the program started. The program kicked off with National Anthems of both India and Canada, followed by a classical Kuchipudi dance by Udayasree Komaravolu. President, IIT Alumni Canada, Mr. Vishwas Dhekney addressed all attendees and signed Memorandum of Understanding with Canada India Foundation and Indian Institute of Management Alumni in Canada. Hips Don’t Lie Dance Co. entertained the audience with Bollywood dance performances. Singers (Himanshu & Annupriya) enthralled the audience with their melodious vocals. Ranjeet Bhide entertained everyone with a stand-up comedy show.