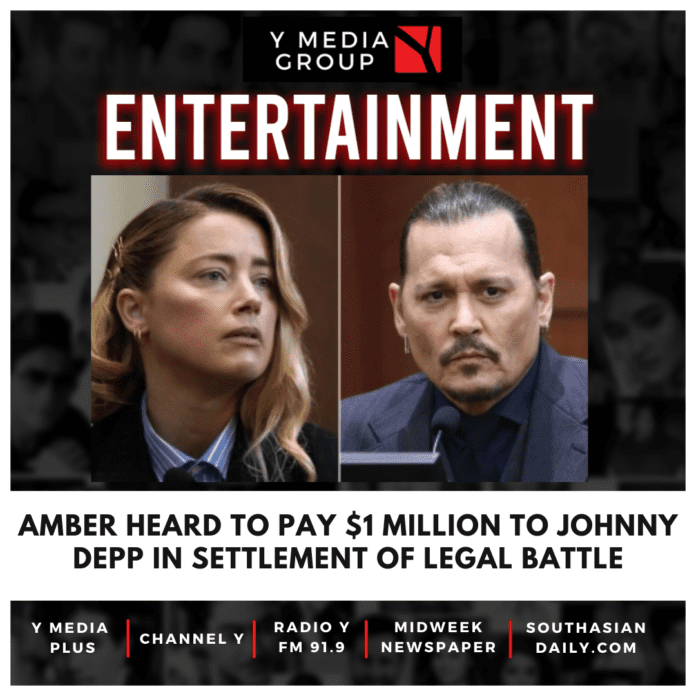 Actress Amber Heard will pay Hollywood star and former husband Johnny Depp $1 million to settle their long-running legal battle, in which each accused the other of domestic violence.

The sum is a significant reduction from the $8.35 million she was ordered to pay after a six-week trial in Virginia earlier this year. The payment is expected to come from her insurance carrier, reports ‘Variety’.

In a statement, Depp’s attorneys said that he would donate the money to charity. His attorneys have previously said that the case was “never about the money” for Depp. In her own statement, Heard said she had “lost faith in the American legal system.”

She also said that the settlement spares her the ordeal of further litigation and allows her to finally “emancipate” herself from their marriage.

Depp originally filed a $50 million defamation claim against Heard in March 2019 after she published an op-ed in the Washington Post in which she described herself as a “public figure representing domestic abuse”.

At the trial, each actor testified for several days, revealing lurid details of drug abuse and screaming matches. Their testimony was streamed live on YouTube and remixed endlessly on TikTok and Facebook.

Heard alleged that Depp repeatedly assaulted her, choked her and once raped her with a liquor bottle. She often broke down in sobs during her testimony.

Depp, meanwhile, alleged that Heard was the aggressor in the relationship, and that he would try to retreat whenever she became violent. The couple had made audio recordings of their arguments during their marriage, and each side played clips they had selected to try to corroborate their accounts.

The seven-person jury ruled in Depp’s favor on three separate claims of defamation, awarding him $10 million in compensatory damages and $5 million in punitive damages. The latter sum was knocked down to $350,000 to comply with a statutory cap.

In a small consolation to Heard, the jury also found in her favour on one of her three counterclaims, finding Depp liable for a statement made by his attorney in which Heard was accused of perpetrating a “hoax”. Depp was ordered to pay Heard $2 million, leaving a net judgment of $8.35 million in Depp’s favour.

The following month, Heard filed a notice of appeal, with her attorney citing “errors” made by the court. However, the “Aquaman” actor has now agreed to withdraw her appeal.

In a statement posted on Instagram announcing the decision, Heard made clear that “There are no restrictions or gags with respect to my voice moving forward” and blasted the US legal system for turning her testimony into “entertainment and social media fodder”.

She also compared her experience of the US legal system to the UK, where Depp sued British tabloid The Sun in 2020 for calling him a “wife beater” in an article. Heard was a chief witness for The Sun.

In that case, the judge called the allegations “substantially true” and found in favour of The Sun.

In a statement, representatives for Depp said they were pleased with the outcome, and emphasized that the jury’s verdict still stands.

“We are pleased to formally close the door on this painful chapter for Mr. Depp, who made clear throughout this process that his priority was about bringing the truth to light,” said Depp’s attorneys Benjamin Chew and Camille Vasquez. “The jury’s unanimous decision and the resulting judgement in Mr. Depp’s favour against Ms. Heard remains fully in place. The payment of $1 million – which Mr. Depp is pledging and will (actually) donate to charities – reinforces Ms. Heard’s acknowledgement of the conclusion of the legal system’s rigorous pursuit for justice.”

Heard first levelled her abuse allegations against Depp in 2016, in the course of her divorce from the ‘Pirates of the Caribbean’ star. She later received $7 million in a settlement and the couple agreed not to speak of the matter again, signing non-disparagement and non-disclosure agreements.