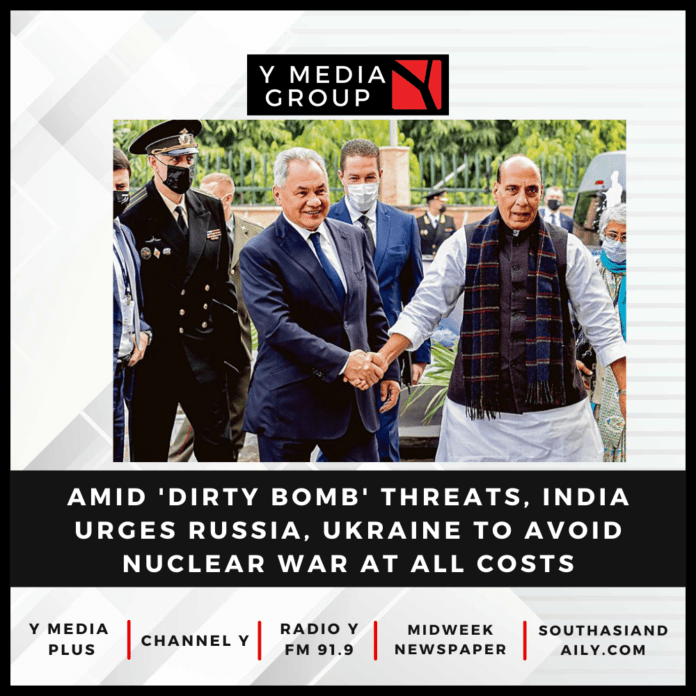 Defence Minister Rajnath Singh on Wednesday told his Russian counterpart Sergei Shoigu that the nuclear option should not be resorted to by any side involved in the Ukraine conflict and the crisis should be resolved through dialogue and diplomacy.

In their telephonic talks, Shoigu briefed Singh on the evolving situation in war-torn Ukraine, including his concerns about possible “provocations through use of ‘dirty bomb'”, the defence ministry said.

Singh’s comments that the nuclear option should not be resorted to is a message to Russia as well as Western powers backing Ukraine, people familiar with the matter said. Ukraine does not have any nuclear arsenal.

Last month, Putin issued a thinly veiled threat that Moscow could exercise the option of using nuclear weapons to defend Russian territory in case of an escalation in the conflict.

According to media reports from Moscow, Putin on Wednesday monitored drills of Russia’s strategic nuclear forces involving multiple practice launches of ballistic and cruise missiles in a show of force amid the heightened tensions with the West over the Ukraine conflict.

“Singh reiterated India’s position on the need to pursue the path of dialogue and diplomacy for an early resolution of the conflict,” the defence ministry said.

“He pointed out that the nuclear option should not be resorted to by any side as the prospect of the usage of nuclear or radiological weapons goes against the basic tenets of humanity,” it said in a statement.

The conversation took place at the initiative of the Russian defence minister amid escalation of hostilities between Russia and Ukraine.

The ministry said the two ministers also discussed bilateral defence cooperation as well as the deteriorating situation in Ukraine.

According to a Russian readout, Shoigu discussed with Singh the situation in Ukraine and conveyed to him his concerns about “possible provocations by Ukraine with the use of a dirty bomb.” Since the conflict began in February, Prime Minister Narendra Modi spoke to Russian President Vladimir Putin as well as Ukrainian President Volodymyr Zelenskyy a number of times.

In a phone conversation with Zelenskyy on October 4, Modi said there can be “no military solution” and that India is ready to contribute to any peace efforts.

At a bilateral meeting with Putin in the Uzbek city of Samarkand on September 16, Modi told him that “today’s era is not of war”.

India has consistently maintained that the crisis must be resolved through diplomacy and dialogue.

There has been intensification of hostilities between Russia and Ukraine with Moscow carrying out retaliatory missile strikes targeting various Ukrainian cities in response to a huge blast in Crimea nearly two weeks back. Moscow had blamed Kyiv for the blast.

The Indian embassy in Ukraine has asked Indian nationals to leave the country at the earliest in view of the fresh wave of hostilities.