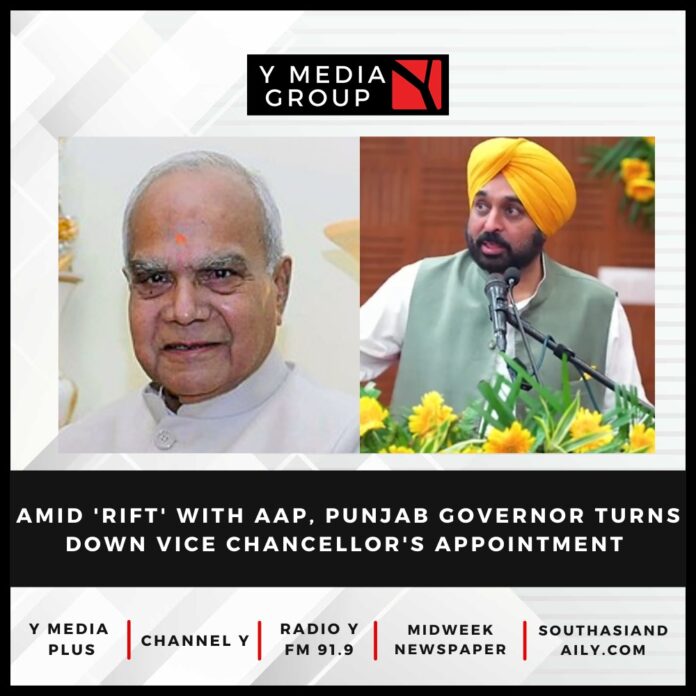 Amid the “rift” between Punjab Governor Banwarilal Purohit and the Aam Aadmi Party (AAP) government led by Bhagwant Mann, the former on Tuesday declined to clear the appointment of cardiologist Gurpreet Wander as Vice Chancellor of Baba Farid University of Health Sciences, saying the government violated the rules by recommending only one name.

The Governor, who is the Chancellor of the university, has returned the file by asking the government to send a panel of three candidates for the selection to the post.

Interestingly, the Chief Minister has already announced the appointment of noted cardiologist Wander as the next Vice Chancellor.

The minister was caught in a row when he asked Bahadur to lie on a “dirty” patient’s bed during the visit. A video of the minister “forcibly asking the Vice Chancellor to lie on the bed” had gone viral on the social media.

The minister can be heard speaking “rudely” with the Vice-Chancellor over the lack of cleanliness in the medical college.

The move to appoint Wander as the Vice Chancellor comes just two days after the Governor took strong exception over the absence of the Chief Minister at the civic reception organised by him in honour of visiting President Droupadi Murmu.

Reminding the Chief Minister of constitutional obligations that have to be met on such occasion, the Governor, amidst the presence of President Droupadi Murmu, Haryana Chief Minister Manohar Lal Khattar and his Haryana counterpart Bandaru Dattatreya had said publicly from the stage: “I had personally called him (Chief Minister) up, but he has not come apparently due to some compulsion.”

Chief Minister Mann was on a political tour to poll-bound Gujarat along with AAP national convenor and Delhi Chief Minister Arvind Kejriwal on Saturday. Mann was also conspicuously absent at the Indian Air Force’s 90th Air Show at Sukhna Lake here on that day.