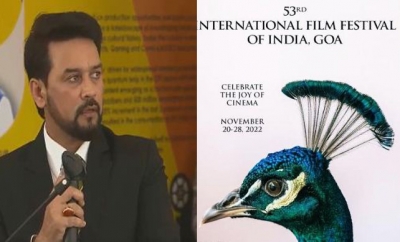 Information and Broadcasting, and Sports and Youth Affairs Minister Anurag Thakur announced a slew of initiatives to promote India as an international film shooting destination.

The minister, who’s big on making India a major global content hub, unveiled an incentive scheme for the audio-visual co-production and shooting of foreign films in India with a cash incentive of up to 30 per cent, capped at $260,000.

An additional 5 per cent, or up to a maximum of Rs 50 lakh ($65,000), will be granted to film units that employ 15 per cent or more manpower from India, the minister added in his speech at the inauguration of the star-studded Indian Pavilion at the Marche du Cannes on a sun-dappled Wednesday in the French Riviera.

The high point of the inauguration, which began with a performance by the Rajasthani folk artiste Mame Khan, was the release of the first-look poster of the 53rd International Film Festival of India (IFFI), which carries the tagline ‘Celebrate the Joy of Cinema’. The festival will be held in Goa from November 20 to 28, 2022.

The minister said: “While preserving our age old stories, Indian filmmakers are innovating in the art of storytelling through the use of technology. The Indian film industry, which produces almost 2,000 films every year, is the world’s largest.”

And to make sure that this creative powerhouse is not lost, the minister made another major announcement. “We have started the world’s largest film restoration project under the National Film Heritage Mission. As part of this drive, 2,200 movies across languages will be restored to their former glory.”