As US and UK deliver long-range missiles to Ukraine, Putin warns of destroying facilities not targeted so far 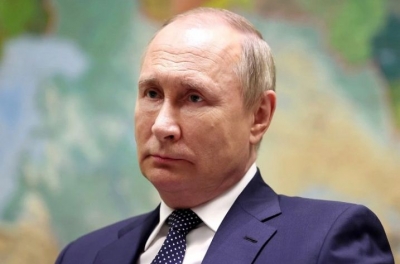 Russian President Vladimir Putin has warned of destroying those military facilities in Ukraine that have not yet been targeted by the Russian forces if Kyiv continues to receive supply of Multiple Launch Rocket Systems (MLRS) from the West.

Noting that the Ukrainian army already operates similar Soviet-and Russia-made Grad, Smerch and Uragan rocket systems, Putin said that the delivery of long-range missiles by the United States and some other countries is meant to replenish the losses of Ukrainian military equipment.

In an interview to state-owned Russian television channel Russia-1 aired on Sunday, the Russian President said that the sole aim of flooding Ukraine with military supplies is to prolong the armed confrontation.

“If it now comes to rockets and they are supplied, we will draw conclusions from that and employ our weapons that we have in sufficient quantities to strike those facilities that we are not attacking so far,” said Putin during the interview.

The Russian military has already taken attack on the Ukrainian military infrastructure to new territories, striking rail infrastructure in Kyiv on Sunday in an attempt to disrupt the supply of Western military equipment to frontline Ukrainian units. This as the battle to gain control of the contested city of Sieverodonetsk rages on in eastern Ukraine.

Putin’s warning comes as Britain announced that it will send multiple-launch rocket systems to Ukraine which can strike targets up to 80 km.

“These highly capable multiple-launch rocket systems will enable our Ukrainian friends to better protect themselves against the brutal use of long-range artillery, which Putin’s forces have used indiscriminately to flatten cities,” said British Defence Minister Ben Wallace on Sunday.

London’s decision comes after a similar move from Washington last week with the US President Joe Biden directing the drawdown of an additional $700 million in weapons and equipment from the US Department of Defence Inventories to support Ukraine.

Both US Secretary of State Antony Blinken and the UK Foreign Secretary Elizabeth Truss had also reconfirmed the “importance of transatlantic unity” and the urgency of continued support to Ukraine.

“You see how Ukraine is being pumped with weapons and heavy weapons. Now the Americans are giving multiple launch rocket systems. Immediately, the British fussed, who, apparently, were waiting for a go-ahead from Washington: they say, we will now give the Ukrainians MLRS. This is a risky path,” said Russian Foreign Minister Sergei Lavrov in an interview to a Bosnian-Serbian television and radio company.

However, cracks within the European countries are quite evident now as the Russia-Ukraine conflict entered its 103rd day today.

On Saturday, French President Emmanuel Macron said that Russia “must not be humiliated” as a window for diplomacy should remain open.

A day later, Turkish President Recep Tayyip Erdogan commented that Europe was in panic over the conflict in Ukraine.

The divisions were also glaringly visible during the recently-held World Economic Forum at Davos where the former US Secretary of State Henry Kissinger suggested that Ukraine should agree to cede parts of its territory to Russia and reach a peace agreement with Moscow to end the hostilities.

“Negotiations need to begin in the next two months before it creates upheavals and tensions that will not be easily overcome. Ideally, the dividing line should be a return to the status quo ante. Pursuing the war beyond that point would not be about the freedom of Ukraine, but a new war against Russia itself,” stated the nonagenarian foreign policy guru.