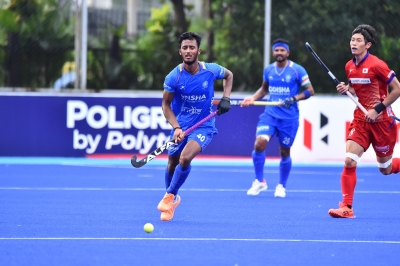 Indian men’s hockey team claimed the bronze medal in the Hero Asia Cup 2022 after picking a 1-0 win over Japan at the GBK Sports Complex Hockey Stadium here on Wednesday.

In a tight contest that saw a solid defensive performance from the Indian Men’s Hockey team, Raj Kumar Pal (7′) scored the sole goal for India to help them pick a close win.
India began the match cautiously, holding possession in the midfield. Karthi Selvam received a brilliant pass inside the circle, and he passed the ball to Vishnukant Singh, who was left unmarked. But the Japanese defence deflected the danger away.

An inspirational run from Uttam Singh on the right channel opened up Raj Kumar Pal inside the circle, and he put the ball into the goal to give India a 1-0 lead. India received back-to-back Penalty Corners before the end of the first quarter, but Japan defended well to clear the danger.

India immediately started stitching attacking moves in the second quarter, looking to quickly double their lead. Japan received back-to-back penalty corner opportunities as Indian defence faced their first real test in the match. But the first rusher Yashdeep Siwach denied Japan twice to keep the opposition at bay. Japan continued to search for the equaliser but the Indian defence stood tall and maintained their 1-0 lead till halftime.

India started creating attacking moves from the left flank at the start of the second half. Japanese captain Seren Tanaka tried to cross a dangerous ball inside the circle, but Dipsan Tirkey was alert and quickly cleared away the ball. Japan received another PC opportunity to get back on level terms, but Indian defence made a good save to deny the opposition yet again. Another late PC for Japan tested Indian defence once again, but India yet again managed to hold on to their lead.

Japan earned yet another PC opportunity at the start of the final quarter, but it was blocked away by Manjeet. Uttam Singh received a stunning pass from Abharan Sudev and he ran inside the circle to go one-on-one with the Japanese goalkeeper.

But goalkeeper Takashi Yoshikawa managed to dispossess Uttam Singh and made the save. Maninder Singh stitched a last-string attach in the final minute, but Japanese defence dispossessed him. But they were unable to get the equaliser in the last 30 seconds and India picked up a 1-0 win.