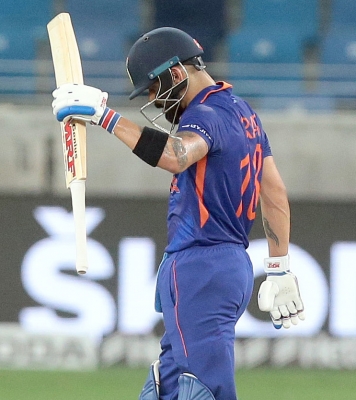 Virat Kohli ended his drought of not scoring a century in international cricket for 1020 days with a sensational career-best 122 off just 61 balls to power India to 212/2 against Afghanistan in a dead-rubber of Super Four stage in Asia Cup 2022 at the Dubai International Stadium on Thursday.

As captain Rohit Sharma was rested, Kohli was promoted to opening the batting with stand-in skipper KL Rahul. After a rollicking opening stand of 119 off 76 balls, Kohli accelerated amazingly from 59 off 40 balls to get his next 72 runs off just 21 balls.

His unbeaten 122, laced with 12 fours and six sixes, a mix of classic and brutal cricket shots at the same time, came at a strike-rate of 200, which is also the highest score by an Indian men’s batter in T20Is.

After first two overs yielded no boundaries, India got going as Rahul and Kohli hit a four each through leg-side off Fazalhaq Farooqui. Rahul then pulled Mujeeb Ur Rahman through backward square leg before cutting and pulling off Fareed Ahmed for a brace of fours.

Kohli got on the aggressive mode by dispatching Mujeeb for fours through down the ground and sweeping through backward square leg, before ending the powerplay on a high with a six slammed down the ground.

Post power-play, Rahul pulled Rashid Khan for six over deep mid-wicket while Kohli was dropped on 28 as Ibrahim Zadran parried the ball coming off a mishit on Mohammad Nabi’s over the boundary rope for six more.

Kohli looked in sparkling touch, with an inside-out loft over extra cover being the standout to reach his fifty in 32 balls. In the next over, Rahul got his fifty in 36 balls with pull and loft fetching him successive fours off Nabi.

But in a bid to go big, Rahul pulled on a cross-seam ball off Ahmed and top-edge flew to long-on. Suryakumar Yadav flicked nonchalantly over fine leg for six on his first ball. But on the very next ball, he chopped on to his stumps off Ahmed.

Kohli continued to impress against spin in his knock, lofting Rashid over deep mid-wicket for six. He then upped the ante with successive flicks for fours off Ahmad and smacked a brace of fours through off-side off Farooqui.

After slamming Ahmed down the ground in 19th over, Kohli brought up his maiden T20I century in 53 balls with a six pulled high over deep mid-wicket for six. Farooqui came in for more thrashing in the final over as Kohli thumped him for sixes over long-off and deep mid-wicket before creaming a four through cover to take 18 runs off the final over.