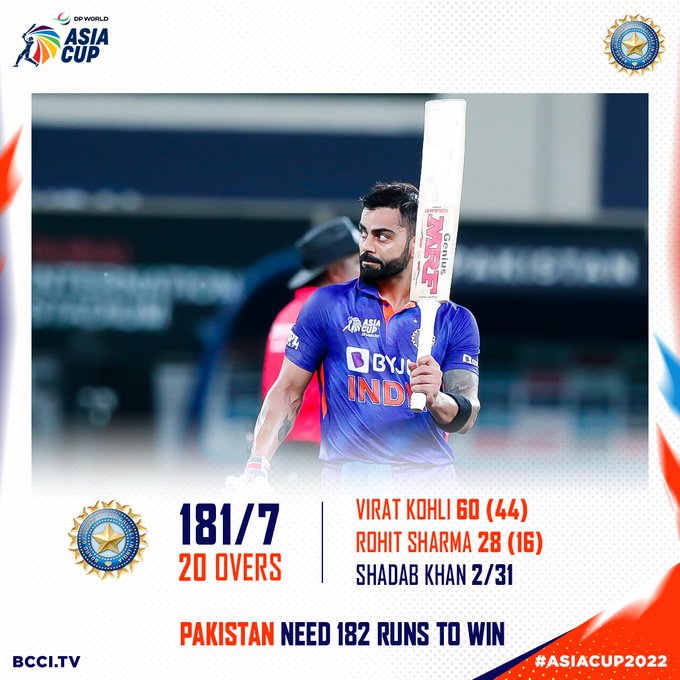 Virat Kohli slammed his second consecutive fifty in as many matches as India posted a competitive 181/7 against Pakistan in the second Super Four match of Asia Cup 2022 at the Dubai International Stadium on Sunday.

Pushed into batting first, Kohli top-scored with 60 off 44 balls, hitting four fours and a six, while running hard between the wickets and was superb against pacers in an innings where India reverted back to its aggressive attacking approach.

Kohli’s knock came after the opening pair of captain Rohit Sharma and K.L Rahul came out all guns blazing in a 54-run opening stand. For Pakistan, spinners Mohammad Nawaz (1-25) and Shadab Khan (2-31) bowled eight overs between themselves and conceded just 56 runs. Pacers Naseem Shah, Mohammad Hasnain and Haris Rauf had a wicket apiece.

Sharma gave India a rollicking start, dancing down the pitch to lift Shah over cover for four and ended the 10-run opening over with a pulled six over deep mid-wicket. He then elegantly lofted Hasnain for another four over mid-off.

Rahul joined the boundary-hitting party with a brace of sixes off Shah in the third over. A beautiful lofted off-drive went over wide long-off while a flicked loft off the wrists was slammed straight down the ground.

Sharma’s carnage continued as he crunched a drive past cover for four and pulled Rauf on the very next ball over deep mid-wicket for six. Rahul got India’s fifty in 4.2 overs by dancing down the pitch to hammer Nawaz down the ground for four.

Rauf broke the 54-run opening stand in the final over of the powerplay, as Sharma mishit a slower ball to point. India’s second wicket fell on the very first ball post-powerplay as Rahul holed out to long-on off Shadab.

Suryakumar Yadav and Kohli got two fours each to continue India’s high-risk approach. But Nawaz struck in the tenth over, having Suryakumar slog-sweeping straight to backward square leg.

With Nawaz keeping things tight, Kohli took to taking fours off Shah and Hasnain through pull and drive. Rishabh Pant hoicked hard off Shah and had an outer edge on a slog off Shadab for a brace of fours.

But the leg-spinner had the last laugh as Pant reverse-swept straight to backward point. In the next over, Hardik Pandya punched a cross-seam ball from Hasnain straight to a forward diving short mid-wicket to depart for a two-ball duck.

Deepak Hooda’s first four was driven firmly through the gap between mid-off and extra cover off Rauf. He then arched back to ramp a bouncer from Hasnain over the keeper’s head. Kohli got his fifty in 36 balls with some style, shuffling towards off-side and whipping Hasnain over deep mid-wicket for six.

The last two overs didn’t bring a glorious finish for India as Deepak Hooda skied high to long-on off Shah while Kohli fell inches short of his crease while trying to complete the second run. But misfields in the deep on the last two balls gave India back-to-back fours and took the total above 180.