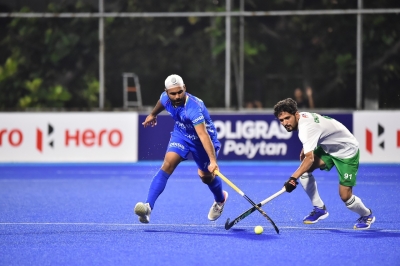 A young Indian side failed to capitalise on a number of chances and conceded a goal two minutes before the end of the match against arch-rivals Pakistan as the opening encounter between the two teams ended 1-1 in the Asia Cup hockey competition here on Monday.

India had to thank goalkeeper Suraj Karkera who pulled off at least five superb saves to keep India in the hunt before they conceded a late goal.

Selvam Karthi opened the score for India in the eighth minute when his drag flick on India’s second penalty corner took a deflection off a defender’s stick and went into the goal to make it 1-0.

India then created many chances but could not add to their score while Pakistan too missed many chances, But just when it looked like India will be lucky to gain the full three points from the match, Rana Abdul shot off a penalty corner save by Birendra Lakra on the goal line and scored the equaliser. Forward Simranjeet had a chance in the final minute of the match but shot wide as the match ended 1-1.

India dominated the match, enjoying 55 percent possession as against 45 by their rivals. However, the two teams made 11 shots each at the goal and had 19 circle penetrations each. India earned six penalty corners while Pakistan had one as they scored a goal each.

India had gone into the match with seven first-timers with only Birendra Lakra, Neelam Sanjiv Xess, Simranjeet Singh and SV Sunil besides Karkera having some experience of playing at the senior level.

The team paid for the lack of experience as the players committed a number of errors, allowed turnovers and lacked direction upfront.

Pakistan too made the same mistakes, their forwards Ahmad Ajaz, Abu Mahmood and Afraz penetrated the Indian shooting area on a number of occasions but could not score a goal. Whenever they managed to direct the ball towards the goal, they found Karkera hard to beat.