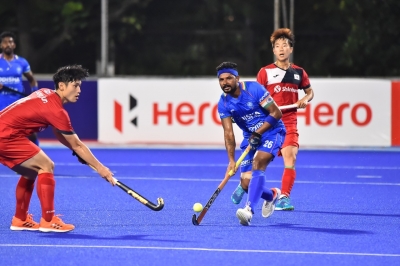 Indian men’s hockey team missed out on a chance to reach the Hero Asia Cup 2022 Final after playing out a thrilling 4-4 draw against Korea at the GBK Sports Complex Hockey Stadium here on Tuesday.

With Korea and Malaysia leading on goal difference in the Super 4s Pool Table, India needed to win the match to reach the Final. The contest went right down to the wire with India giving a tough fight till the final whistle.

The match started with an attacking move from India as Dipsan Tirkey came from the left flanks to pass the ball to Pawan Rajbhar inside the circle. But the Korean defence was quick to avert the danger.

A Penalty Corner opportunity minutes later taken by Nilam Sanjeep Xess was again defended well by Korea, but India continued to threaten from the right channel. Nilam Sanjeep Xess received another chance to score from a PC a couple of minutes later, and this time, he converted to give India a 1-0 lead. But Korea drew level immediately with Jang Jonghyun scoring from a PC before the close of the first quarter.

India launched an attacking move straight away in the second quarter with Dipsan Tirkey hitting a shot on target, only to be saved by Korean goalkeeper Kim Jaehyeon. Ji Woo Cheon doubled Korea’s lead, hitting the ball past Indian goalkeeper Suraj Karkera from close quarters. Maninder Singh drew level minutes later, scoring a goal off a rebound from a Penalty Corner.

A counter-attacking move from India stunned the Korean defence as Sheshe Gowda BM put the ball into the nets to put India back in the lead. Kim Jung Hoo drew level once again, scoring a goal from an awkward angle, as the match went to halftime with the scoreline reading India 3-3 Korea.

India began cautiously in the second half, holding on to ball possession at the start of the third quarter. The Korean defence was caught off guard again in the 37th minute as Sheshe Gowda BM made an excellent cross inside the circle for Mareeswaran Shakthivel, who tapped the ball into the back of the nets to give India a 4-3 lead. Jung Manjae drew the score level after hitting the ball past Suraj Karkera, and the match went to the final quarter with the scoreline levelled at 4-4.

India stitched an attacking move straight away in the final quarter with Vishnukant Singh passing the ball to Karthi Selvam inside the circle. But Karthi’s cross towards SV Sunil in front of the goal, just went past the Indian veteran.

As the clock started winding down, India started showing an urgency in attack, while Korea sat down deep in their half to defend India’s strings of attack. India received a chance to score a late goal in the last minute as Pawan Rajbhar sent a long pass inside the circle towards Uttam Singh. But the Indian player was unable to get his stick on to the ball and the match ended in a draw.