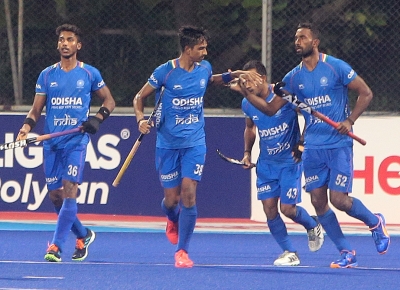 At a venue in which the Indian men’s hockey team has suffered two morale-shattering defeats to Japan — at the Asian Games in 2018 and a 2-5 defeat in the preliminary round here a few days ago, coach Sardar Singh’s team exacted some revenge as it emerged 2-1 winner in a Super 4s Pool encounter in the Asia Cup 2022, on Saturday.

The GBK Stadium here has not been such a great venue for India at least when it comes to playing with Japan, but on Saturday, the defending Asia Cup champions came up with superb performance, went ahead twice and absorbed a lot of pressure exerted by the Japanese team 2-1 winner.

Forward Manjeet Singh opened the score for India in the seventh minute with a brilliant solo effort and though Japan equalised 10 minutes later with a goal by Takuma Niwa, the defending champions scored the winner through Pawan Rajbhar in the third quarter they totally dominated. India survived some anxious moments in the fourth quarter as Japan came back strongly but, in the end, they could not deny victory. Goalkeeper Suraj Karkera denied the Japanese forwards on a number of occasions to keep the Indians in the game.

India had a slight edge in ball possession 52-48 percent, Japan were better on all other parameters — they had 15 circle penetrations as compared to 13 by India and nine shots at goal as compared to seven by their rivals. Japan bagged five penalty corners while India got only one.

The win puts India on top in the Super 4s pool standings as the other match involving Malaysia and Korea ended in a 2-2 draw.

India started the match well but it was Japan that dominated the first quarter, creating a couple of good chances. However, India opened the scoring against the run of play when in the seventh minute, Manjeet Singh, set up by Uttam Singh, made a brilliant solo runs from the left channel, cutting along the baseline, beating the entire defence to slot it past the goalkeeper from an acute angle.

India earned a penalty corner in the 11th minute but with Dipsay Tirkey on the bench, Neelam Sanjeev Xess’ flick was cleared by a defender.

Japan had a chance to equalise in the 12th minute but Ryuoma Ooka failed to capitalise on the good work by Ryosei Kato and missed the chance as the first quarter ended with India 1-0 up..

But there were no such mistakes minutes into the second quarter when Japan equalised off their second penalty corner. when Yamasaki Koji’s flick was saved by India goalkeeper Suraj Karkera but Takuma Niwa, who was swift to react, pushed home the rebound to make it 1-1,

Japan had two chances of taking the lead but were denied.

India received a golden opportunity at the start of the second half with Maninder Singh sending a long pass towards SV Sunil, who was standing unmarked inside the circle. But the ball just went wide off the Indian veteran.

India scored the winner in the 34th minute when Pawan Rajbhar capitalised on a superb run by Uttam Singh down the left channel and scored with a slapshot off the goalkeeper’s helmet. India maintained their nerves in defence after taking the lead, denying Japan the opportunity to level the score from a PC.

At the start of the final quarter, Manjeet tried to extend India’s lead with a shot towards the goal from an acute angle, but Japan goalkeeper Takashi Yoshikawa made the save. Japan exerted a lot of pressure in the final quarter but the Indian defense stood strong and denied them.