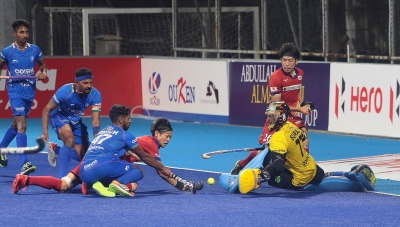 With Japan trouncing India 5-2 in their pool A clash, India will now need to beat hosts Indonesia by a big margin and expect a favourable result in the Pakistan-Japan game on Thursday to stay in contention for a place in the Super 4s.

India had earlier drawn 1-1 against arch-rivals Pakistan in their opening pool match on Monday while Japan began their campaign with a strong 9-0 win against hosts Indonesia.

On Tuesday, Japan were by far a better side on display as they put pressure on the young Indian team right from the start. They mounted relentless attacks, put pressure on the Indian defence and gave little room for counter-attacks, which is India’s forte.

While both teams had played out a goalless first quarter, Japan pumped one in the 24th minute through a PC awarded following India’s infringement in defence. Even though it was an even play after the 10-minute half-time break, India gave away too many chances to Japan. Kawabe’s goal in the 40th minute doubled their lead.

But India made a surge in the 45th minute through Rajbhar’s goal, however, conceded one in the 49th minute through Ooka. Japan’s 3-1 lead was reduced to 2-3 when Uttam Singh scored a swift field goal in the 50th minute springing hope in the Indian dugout.

But defensive lapses allowed a flurry of goals by Yamazaki (54?) and Kawabe (56?) in the final few minutes that put Japan in a formidable position to win.

India will play Indonesia in their last pool match on Thursday.