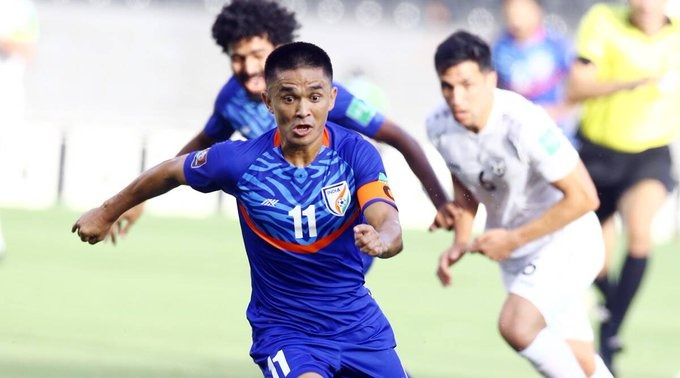 Sunil Chhetri struck his magic again with a swirling free-kick goal (85′) but the Lions of Khorasan pulled one back within three minutes from a Zubayr Amiri free header (88′) before Sahal Abdul Samad’s prolific strike (90+2′) sealed the deal for the Blue Tigers.

Igor Stimac’s men face Hong Kong in their summit clash of the third round of the AFC Asian Cup Qualifiers with the stakes being high for both sides.

India got off to a quick start and ensured a dominant display in the opening minutes of the game. Manvir Singh found himself in a brilliant position, cutting inside from the right-wing, spearheading the attack with an attempt at goal but was tackled right in the offing.

Six minutes later, Liston Colaco won a free-kick as he was brought down after a deft body feint saw him get past two defenders, but unfortunately, his shot from the spot sailed over the crossbar.

India continued to pounce on the Afghan side, this time with a brilliant one-two from Ashique Kuruniyan and Akash Mishra as the latter delivered a pass to Chhetri at the edge of the box but the skipper was denied by the Afghans who made no mistake to clear it right away with a tackle.

Bombarding the final third with constant opportunities, India won its fifth corner in the opening fifteen minutes of the game. Roshan Naorem, the corner-kick taker neatly found Jeakson Thounaojam at the near-post but the midfielder’s header missed the goal by a whisker.

In the 20th minute, the Lions of Khorasan got their first big chance of the game through Farshad Noor who picked Qamaruddin Khouyar on the left flank from a cross who then tried to get inside for a shot but defender Roshan Naorem was aware and closed him down within no time.

The side continued to gain momentum and got their second big chance as Khouyar comfortably got past two Blues and tried to cut past Sandesh Jhingan but the defender’s towering presence was strong enough to block his shot. Then, Roshan Naorem went for a long-ranger out of the blue in the 36th minute as he caught the keeper off-guard and placed one in but the keeper made a save right in time to deny his attempt for a goal.

Igor Stimac’s men continued their dominant display, this time through skipper Sunil Chhetri who went in for an acrobatic shot from a deflected Manvir SIngh cross but couldn’t connect his attempt, denied by the Afghan defence.

Following on, right before half-time the Blue Tigers found themselves on the backfoot after Afghans went on a quick counter reaching the final third in a one-two situation, but Jhingan was quick on his feet as he swooped in with a last-ditch tackle to keep the situation under control. With plentiful attack from the Blue Tigers, the match headed goalless into half-time, with both sides eager to find the breakthrough.

The second half started quickly for India as they pounced on the attack through Ashique Kuruniyan who got past two players and delivered in a cross for Manvir Singh who then found Chhetri open, with the skipper missing the target as he went off balance.

India’s defence was tested again, in the 55th minute, this time through Intezar who was through on goal but Jhingan, yet again, was vigilant enough to shove the ball with a tackle. Eight minutes later, arguably the best chance for Afghanistan, Haydary found himself in a yard of space as he was left unmarked and missed a free header from inside the box.

Brandon Fernandes came on for Liston Colaco and Glan Martins came on for Jeakson Singh. In the 69th minute, Ashique Kuruniyan almost scored the opening goal for India as his long-range shot narrowly missed the target.

India consistently were looking for openings to score their first goal. Fernandes got onto the scene quickly, looping in a cross from the corner for Anwar Ali whose header flew past the goal. Seconds later, India found themselves in a chaotic situation as Anoush Dastgir’s men showcased their lethal counterattack through Zazaye who got Gurpreet Singh into action with an acrobatic attempt but the latter stood strong and punched away his shot.

In the 78th minute, Kuruniyan ran down the wings, as he cut past two defenders and provided a pin-point pass to Fernandes but the midfielder completely squandered the chance as his shot flew over the crossbar, in what was the best chance for the Blue Tigers.

Then, after being awarded a set-piece on a Ashique Kuruniyan foul, captain Sunil Chhetri with a marvellous composure took the mantle and swerved one straight into the top-right corner to make it 1-0 for the Blue Tigers in the 85th minute. However, the Afghans fought their way back within three minutes after Amiri, who was left unmarked, struck a beautiful header to put past Gurpreet Singh to equalise the game.

With an end-to-end action in the final minutes of the game, both sides were on their toes, waiting for the whistle to be blown, with the crowd in the Salt Lake Stadium buzzing for an India win.

In the stoppage time, substitute Sahal Adbul Samad who came on for Sunil Chhetri, brought the lead back to the Blue Tigers after a lethal strike from the edge of the box as he timed a perfect run to receive a pass from Kuruniyan, who danced around three players to open up Samad on the right, with the midfielder making no mistake and finishing straight down the bottom left corner.