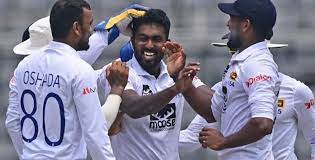 Pacer Asitha Fernando (6/51) down an incisive and decisive spell after lunch on the fifth and final day of the second Test here to break a crucial partnership and trigger a collapse as Sri Lanka thrashed hosts Bangladesh by 10 wickets to win the two-match series 1-0.

On the penultimate day of the match, a solid partnership between Angelo Mathews (145*) and Dinesh Chandimal (124) had helped Sri Lanka take a considerable lead before their bowlers wreaked havoc in the final session to reduce Bangladesh to 34/4, the home side going into stumps trailing by 107 runs.

On Friday, Litton Das and Shakib Al Hasan raised hopes of an unlikely fightback as they struck defiant half-centuries to raise hopes of the hosts holding on to a draw.

But that was not to be as once their 103-run partnership was ended by Asitha as he sent them both back in quick succession, Bangladesh suffered a collapse and lost the match and series.

Bowling with searing pace and reverse swing, Asitha Fernando claimed 6/51, wiping off the Bangladesh middle-order and tail as the hosts lost their last five wickets for 13 runs, their second innings ending at 169, thus setting Sri Lanka 29 runs to win the match. The visitors raised the required runs in three overs with Oshada Fernando blasting a nine-ball 21 to seal a 10-wicket victory.

Asitha was the best bowler for Sri Lanka as he claimed 6/51 and added with his first innings haul of 4/93, completing his first 10-wicket match haul (10/141) in his fifth Test.

Earlier, the 103-run partnership between Litton Das and Shakib Al Hasan delayed Sri Lanka’s march to victory and saved the hosts from the embarrassment of an innings defeat. With the hosts losing their top-order with just 23 runs on the board (23/4), Bangladesh’s hopes rested on Das and Shakib.

The duo stitched together an unbeaten 96-run partnership by lunch, which helped Bangladesh take a slim lead of eight runs with Shakib on 52* and Das on 48*.

After the break, Das completed his half-century but soon lost his wicket to Asitha, the bowler changed direction in his follow-through to dive low to his right to complete an excellent one-handed catch. His dismissal for 52 triggered a collapse, and Asitha continued his assault.

He set up Shakib superbly, peppering him with some short stuff, and got him dismissed for 58 — the batter fending at a short one into the body awkwardly, gloving it to Niroshan Dickwella as Bangladesh slumped to163/7. The tail did not offer any resistance as Sri Lanka marched to victory.

Earlier in the match, Bangladesh opted to bat first but the decision seemed to have back-fired when Bangladesh were reduced to 24/5. However, twin tons from Das (141) and Mushfiqur Rahim (175*) scripted a brilliant turnaround as they helped Bangladesh end the day’s play at 277/5. Bangladesh then extended their score and ended their first innings at 365. Sri Lanka’s Kasun Rajitha recorded his best bowling figures of 5/64, his first five-for in Tests.