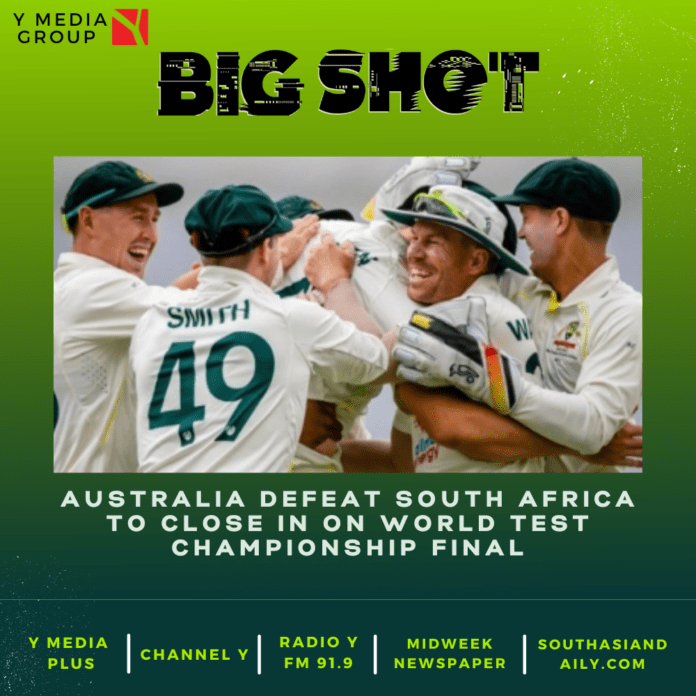 Australia have maintained their unbeaten Test status at home this summer and closed in on booking a spot at next year’s World Test Championship final with a decisive six-wicket victory over a disappointing South Africa in Brisbane on Sunday.

The win sees Australia move further ahead at the top of the World Test Championship standings, while South Africa are overtaken by India and drop to third as a result of the loss, the ICC said in a statement.

Australia now hold a 76.92 win percentage, with India (55.77) now ahead of South Africa (54.55) following their 188-run triumph over Bangladesh in Chattogram earlier in the day.

The Test match was over in less than two days as Australia’s strong bowling attack – with some assistance from a bowler-friendly surface at The Gabba – made light work of South Africa’s batters with an impressive team performance.

Skipper Pat Cummins (5/42) and the consistent Scott Boland (2/14) did the majority of the damage on Sunday, while Mitchell Starc (2/26) picked up his 300th Test wicket early in the day as South Africa were skittled for just 99 in their second innings.

South Africa caused some concern in the Australia camp when they claimed four wickets. The hosts chased down the 34 required for victory, with Marnus Labuschagne (5*) and Cameron Green (0*) guiding the side home as the Aussies clinched the opening match of the three-game series.

The battle to reach next year’s World Test Championship decider at The Oval is still wide open, with South Africa a chance to reclaim second place with positive results during the remaining two Tests in Australia.

India climb World Test Championship standings after triumph over Bangladesh
The Proteas travel to Melbourne for the second Test that commences on Boxing Day, before the third and final Test of the series in Sydney early in the New Year.

Australia will be keen to add to the three Test matches they have won against the West Indies and South Africa at home this summer, with a difficult trip to India for four Tests in February and March to likely to decide who claims the two spots in the World Test Championship final.