Australian Open: Fritz, Rune And Zverev Progress To Second Round With Contrasting Wins 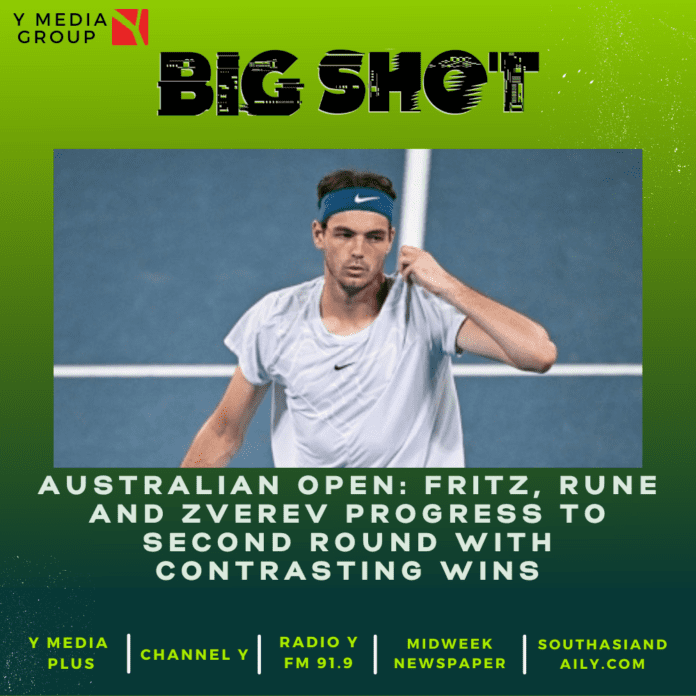 American tennis player Taylor Fritz, in his first Grand Slam campaign as a top-eight seed, made a strong start to his 2023 Australian Open campaign with a 6-4, 6-2, 4-6, 7-5 win against Nikoloz Basilashvili on Tuesday.

Fritz, who also reached the Wimbledon quarterfinals last season, fired 32 aces in the victory as he progressed to the second round for the fifth straight year in Melbourne. He won 84 per cent of his first-serve points in the match.

The 25-year-old will face either Chun-Hsin Tseng or Australian wild card Alexei Popyrin on Thursday in the second round.

“I don’t want to put too many high expectations, but I do expect a lot of myself,” Fritz said in his on-court interview. “I’m in a really good spot right now, I’ve been playing really well. I’ve had a great start to the year so I’m looking to have a big week this week.”

The 19-year-old Rune needed just two hours and three minutes to complete the 6-2, 6-3, 6-4 win over Filip Krajinovic to set up a clash with American Maxime Cressy or Spaniard Albert Ramos-Vinolas.

In his first Grand Slam outing since he suffered a horror ankle injury in his semifinal against Rafael Nadal at last year’s Roland Garros, former world No.3 Zverev put his body to the test in a four-hour and six-minute thriller against Peruvian Juan Pablo Varillas.

Zverev tore several lateral ligaments in his right foot during his Roland Garros semifinal clash against Rafael Nadal in June and only returned to Tour at the United Cup last month. Competing in his third match of the year, the World No. 12 refused to go away against Varillas, striking 69 winners to seal victory in four hours and nine minutes.

“I am extremely happy because I missed this over the past seven months,” Zverev said. “This match alone pays off for all the hard work and suffering that I have had. To win in front of this kind of crowd again. I can’t wait for the rest of the tournament. No matter what happens from now, the tournament is already a success for me.”

The 25-year-old German will next play American Michael Mmoh or Frenchman Laurent Lokoli.