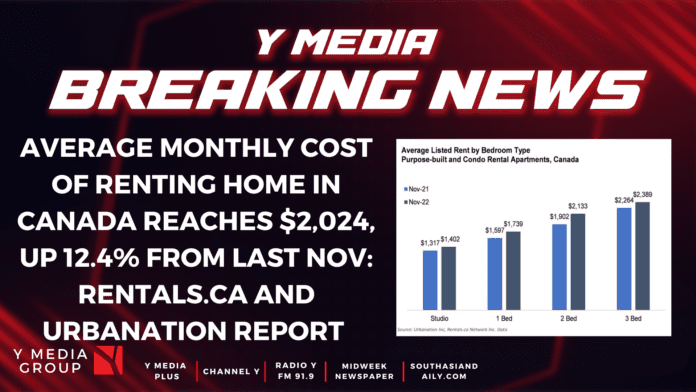 Rent inflation continued to accelerate in Canada during November, with the average listed rent for all types of rental units (including apartments, condominiums and houses) increasing 12.4% from a year ago to a record high $2,024. Rents showed no signs of slowing down last month, rising 2.5% from October and 4.9% over the past three months.

Renters active in the market are now paying an average monthly rent that is $224 higher than last year. Compared to the pre-pandemic average three years ago in November 2019, average rents in Canada have increased 10.5%.

Two-Bedroom Rents Increased the Most

Alberta rents were also up double digits in November (15% year over year), but considerably more affordable at averages of $1,283 for one-bedrooms and $1,618 for two-bedrooms. Quebec remained the slowest growing market for rents with an annual increase of 6.3%.

Steepest Rent Increases in Priciest Markets of Vancouver and Toronto

Calgary represented the third fastest growing rental market among Canada’s largest cities, posting annual growth of 21.9%. Rents in Calgary were substantially less expensive than in Vancouver and Toronto at an average of $1,572 for one-bedrooms and $1,978 for two-bedrooms.

Montreal, which is Canada’s largest rental market, had the slowest annual rent increase among major metros at 7.6%, with rents that have become comparable to Calgary at an average of $1,574 for one-bedrooms and $2,076 for two-bedrooms.

Among medium-sized markets, purpose-built and condominium rents increased fastest over the past year in several cities that surround Toronto, including Brampton (28%), North York (25.8%), Etobicoke (24.5%), Scarborough (22.9%) and Mississauga (19.2%).

Markets west of the GTA also recorded strong rent increases, with London and Kitchener rents up 27.9% and 24.1%, respectively. Outside of Ontario, the fastest growing medium-sized markets were found in Halifax (24.2%) and Burnaby (23.6%).

Markets such as Barrie, Hamilton, Lethbridge, and Surrey located farther out from large cities in Toronto, Calgary, and Vancouver recorded annual rent growth in the 17% to 19% range.

Within Quebec, the growth leader was Quebec City with a 13.8% annual rent increase.