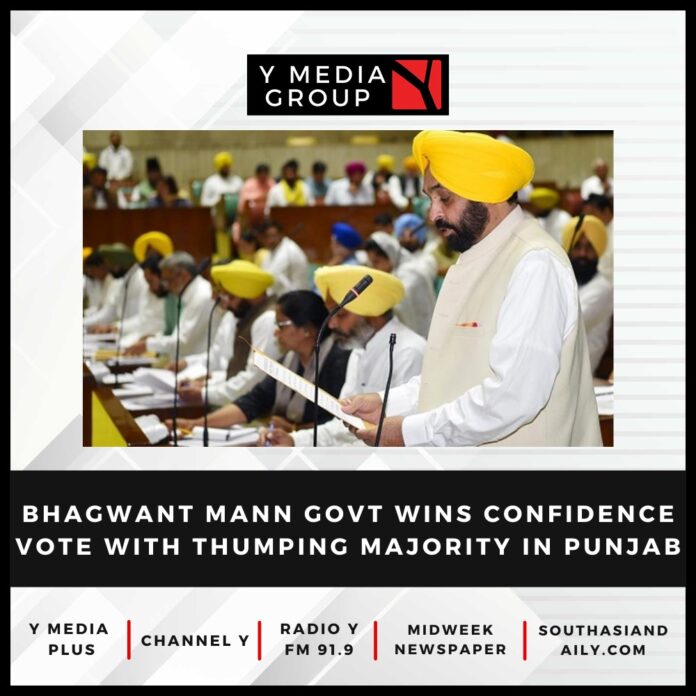 With the Congress and the BJP abstaining, the AAP government in Punjab led by Chief Minister Bhagwant Mann won the vote of confidence with a thumping majority on the final day of the Assembly session.

The lone Shiromani Akali Dal (SAD) and BSP MLAs were present in the House but did not speak against the motion.

A total of 93 legislators voted in favour of the confidence vote.

“I congratulate the people of Punjab for naming the Mohali airport as Shaheed Bhagat Singh International Airport. I will try to get Halwara airport named after Kartar Singh Sarabha,” Mann said.

Terming the Congress and the BJP as two faces of the same coin, Mann had earlier said the confidence motion was necessitated as both the parties have joined hands to topple the democratically-elected government in the state.

“The BJP is using anti-defection law as a new tool to form governments in the state through the backdoor and unfortunately despite of being its worst victim, the Congress is supporting it,” he said, while introducing the confidence motion on the first day of the Assembly session on September 27.

The Chief Minister had said the BJP has toppled the elected governments in Madhya Pradesh, Maharashtra, Karnataka and others by luring MLAs. However, he had said they failed in their sinister moves thrice in Delhi and now also in Punjab, they were trying to purchase the MLAs.

He said the BJP is chasing a mirage of garnering power in the state.