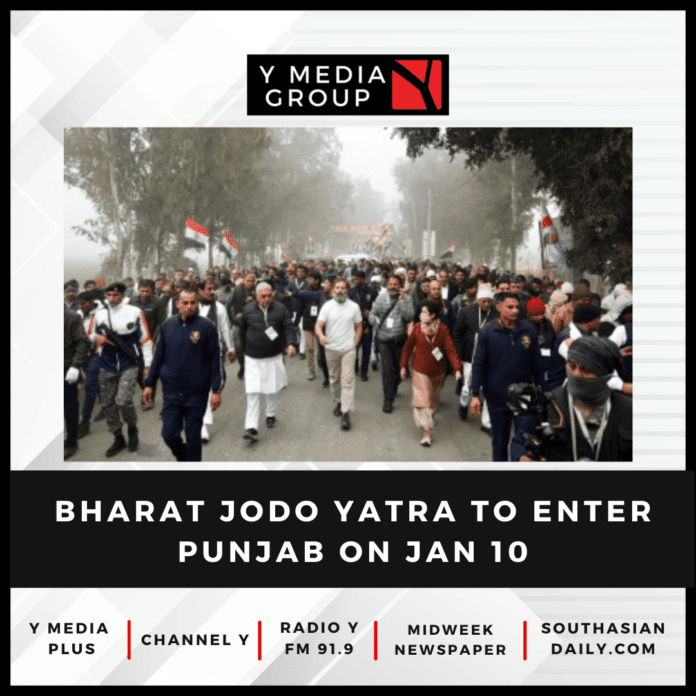 Addressing the media here, state Congress President Amarinder Singh Raja Warring, along with the Secretary in-charge Harish Chaudhary and Leader of the Opposition Partap Singh Bajwa announced that the yatra will enter Punjab through Shambhu border on January 10 and will straightway go to Fatehgarh Sahib.

On January 11, after paying obeisance at the Gurdwara Sahib, Gandhi will address a public meeting before embarking on foot on his Punjab leg of the yatra.

The Congress leaders reiterated that this was not a partisan yatra. It is only that Gandhi is leading it and the logistic support is being provided by the party and workers, Chaudhary said, pointing out that people from a cross-section of society – leaders of various political parties, film personalities, artistes, economists and industrialists – had participated in it.

Chaudhary specifically appealed to the Punjabi NRIs who are right now visiting Punjab to participate in the yatra. He said those staying abroad can mark their participation online.

Raja Warring said the yatra will remain in Punjab for seven days and a mega-rally will be organised at Pathankot on the concluding day before it leaves for Jammu and Kashmir from Madhopur on its last leg.

Replying to a question about some people opposing the yatra, he said Punjabis by nature are most hospitable and they welcome their guests with open arms irrespective of which party, caste or creed he belongs to.

Bajwa said that this yatra had left its mark among the people across the country and had provided “voice to the voiceless”.

He said the yatra will set the tone for the 2024 elections and it will make history.