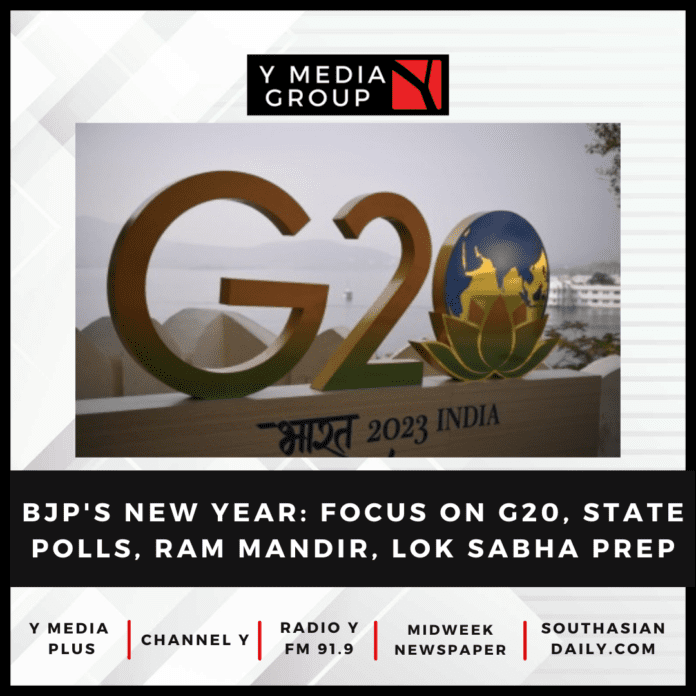 The Bharatiya Janata Party (BJP) has a very tight packed schedule for the whole year in 2023. Focus of the party will be on the mega event of the G20 Summit along with many internal matters.

Under the G20 presidency, India will host over 200 meetings covering more than 30 work streams. As part of the G20 Finance Track, the first G20 Finance and Central Bank Deputies Meeting under the Indian presidency took place in Bengaluru on December 13-14, 2022.

The first meeting of the Development Working Group under the G20 Sherpa Track also commenced in Mumbai on December 13, 2022.

During the G20 Presidency, substantive deliberations across broad priority areas would revolve around inclusive and sustainable growth; accelerating achievement of the SDGs; green development and LiFE (Lifestyle for Environment); public digital infrastructure; reforms of multilateral financial institutions; and international peace and harmony.

Along with this mega show, BJP is eyeing on the southern state where elections are to be held. Karnataka and Telangana are the most visited states by Central leadership including PM Modi.

The year 2023 is going to be politically crucial as several high-stakes political battles are set to take place that are likely to set the tone for 2024 Lok Sabha polls.

At least nine states, from the northeast to the west and south to the central part of the country, are due to witness assembly elections in 2023.

Rajasthan and Chhattisgarh are the two states which are ruled by the Congress government.

Union Home Minister and senior BJP leader Amit Shah on Saturday ruled out an alliance with the Janata Dal Secular (JDS) for the forthcoming Assembly elections in Karnataka, saying, “JDS is no match for the Bharatiya Janata Party.”

Year 2023 is more important for BJP as the construction of Ram Lala floor, where lord Ram will be seated, will be completed by this year. The construction work is going on at a fast pace and the temple will be ready for ‘darshan’ by devotees in December 2023, said Champat Rai, Shri Ram Janmabhoomi Teerth Kshetra general secretary.

Half of the country’s sentiments are attached with the Ram Mandir. Completion of the Ram Lala floor is itself a mega event in in the whole country.

The party, meanwhile, is in election mode with a series of meetings, visits by top leader to states, pravas yojana rollout and on-ground campaigning. Party President J.P. Nadda has already launched his round of political tours with an eye on the 2024 Lok Sabha campaign.