BOLO Program announces new reward of up to $250,000 in update of Canada’s ‘Top 25’ Most Wanted Fugitives, Seven suspects wanted by Toronto Police, Two in the Top 5 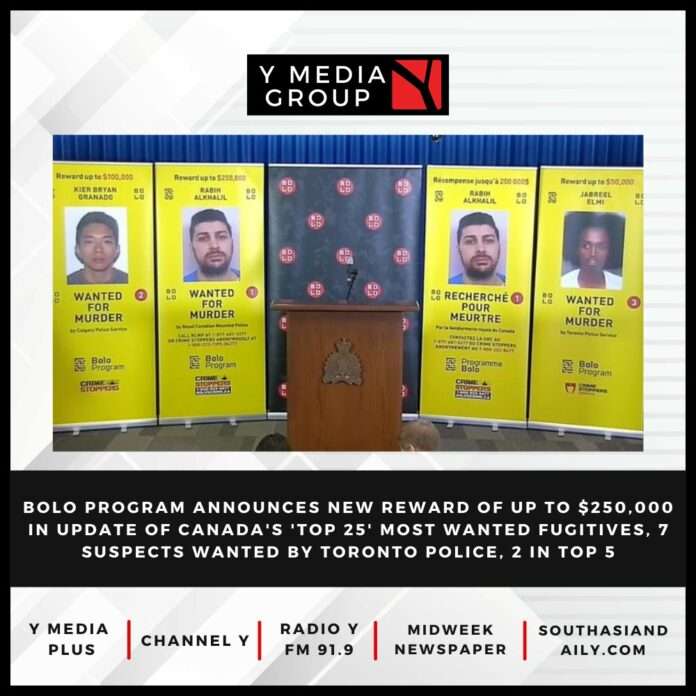 A reward of up to $250,000 was announced Tuesday by the BOLO Program as it updated its Top 25 list of Canada’s most wanted fugitives. The reward was announced for information leading to the arrest of Rabih Alkhalil, who is wanted for being unlawfully at large since last July, when he escaped from the North Fraser Pretrial Centre. At the time of his escape, he was standing trial for a 2012 murder at a downtown Vancouver restaurant. He has since been convicted of first-degree murder in that case.

Alkhalil was already serving sentences for orchestrating the murder of Johnnie Raposo in a Little Italy cafe in 2012 in Toronto, and for his part in a major drug trafficking operation in Quebec. Several other suspects on the updated Top 25 list are connected to rewards of up to $100,000 and $50,000, including three of the seven wanted by Toronto Police.

Bolo Program Director Max Langlois was joined by BC RCMP Deputy Commissioner Dwayne McDonald in revealing the first update to the Top 25 list — a unique initiative that brings together information about Most Wanted suspects from across the country. Toronto Police Homicide Inspector Hank Idsinga was also at the conference to discuss the seven suspects wanted by Toronto Police.

Here are the TPS cases included in the BOLO ‘Top 25’ Update. Cases with asterisks are currently active with rewards:

“This is the first update of the Top 25 list since its launch in Toronto in April 2022. Six suspects from the original Top 25 were located between April and October, including the #1 suspect — Abilaziz Mohamed, wanted for murder by the Toronto Police Service — who was apprehended within 12 hours of the Top 25 launch,” said BOLO Program Directo Max Langlois. “This first update of our Top 25 is part of our commitment to encourage Canadians to be on the lookout for Canada’s most wanted, and to make our communities safer.”