Brampton Santa Claus Parade is back! 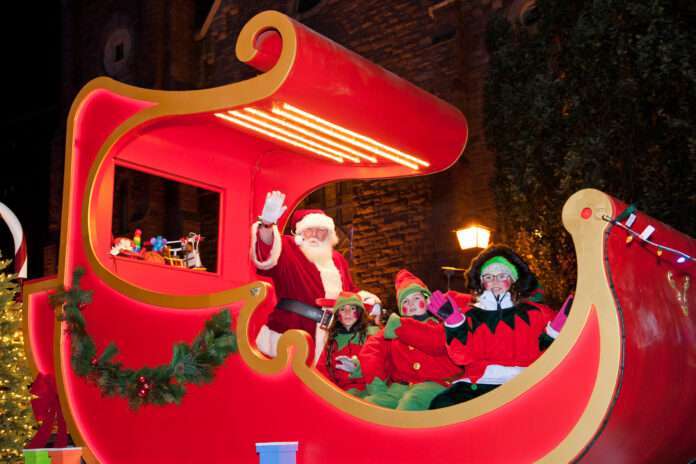 Come out and celebrate this unique nighttime Christmas tradition in Brampton.

This year, the Brampton Santa Claus Parade (Parade) will be live and in-person for the first time since 2019. On Saturday November 19th at 5:00 p.m. sharp, you and your family can witness Canada’s largest nighttime Santa Claus parade on the streets of Brampton.
The 2022 Parade will have over 50 exciting entries, including floats, live bands, giant helium balloons, dance groups, marchers, dignitaries and more. Always a hit with kids of all ages will also be over 100 very popular costume characters thanks to the students of Cardinal Leger Secondary School.
“The 38th annual Brampton Santa Claus Parade is organized and operated by a dedicated group of volunteers, and we are thrilled to be returning to a live in-person parade this year,” said Barbara Schembri, Chair of the Brampton Santa Claus Parade Operations Committee, “This year’s parade is only possible through the dedication and efforts of hundreds of volunteers, sponsors and partners all committed to ensuring a fun time is had by all. The Parade organizing committee can’t wait to see the smiles on the faces of children of all ages as they enjoy the lights, floats, bands and especially Santa
Claus himself!”

Route Change for 2022!
Due to construction in downtown Brampton, the Parade organizing committee is pleased to present an alternate route and asks that spectators familiarize themselves with the route changes. The new route will start at Bramalea Road and Central Park Drive, heading northbound on Bramalea Road, turning right, and heading eastbound on North Park Drive and ending at Jordan Boulevard.

This year, spectators are asked to please bring a non-perishable food donation for the Parade food drive. Keep a look out for the REgeneration Brampton volunteers and their grocery carts collecting food and cash donations during the Parade. This year the need is greater than ever, and your help is very much appreciated.

During the Parade, Santa will have his DHL Global elves collecting letters to Santa from all the kids. Of course, kids can also mail their letters to: Santa Claus, North Pole, HOH OHO.

Large crowds are expected to attend this year, however the Parade will also be broadcast live on YouTube and Facebook, with award winning Host, Michael A. Charbon and Parade committee member, Anita Anonthysene.

The Brampton Santa Claus Parade Committee (Committee) is very grateful for the support of so many in the community who make the parade possible. The Committee would like to acknowledge and thank presenting sponsor, The Rotary Club of Brampton, and major sponsors; Tim Hortons, Mattamy Homes, Delta Bingo and Gaming, Bramalea City Center, The Brampton Guardian, and The Downtown Brampton BIA. The Parade is also supported by the City Of Brampton and hundreds of Bramptonian volunteers.

Road closures on Central Park Drive start at 10:30 a.m. However, other major streets in the area will close at 3:30 p.m. and reopen after the parade around 8:00 p.m. To get your family’s spot on the parade route, it is suggested you arrive early, remembering to dress appropriately. Please visit www.BramptonSantaClausParade.com for more information.