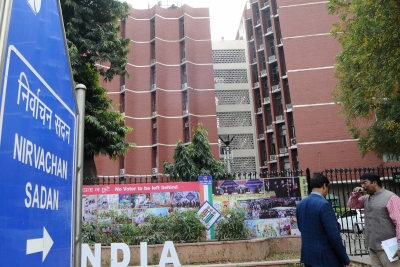 The Election Commission will conduct by-polls for three Parliamentary constituencies and seven Assembly constituencies in five states and Delhi on June 23 and the counting of votes will be held on June 26.

These by-elections will be held for Sangrur Parliamentary constituency in Punjab, and Rampur and Azamgarh in Uttar Pradesh while the Assembly constituencies are Agartala, Town, Bordiwala, Surma (SC), and Jubrajnagar in Tripura, Atmakur in Andhra Pradesh, Rajinder Nagar in Delhi and Madar in Jharkhand.

Acording to the Commission’s order, the date of notification of polls will be May 30, last date of nomination is June 6, the scrutiny will be held the next day, the last date for withdrawal of the candidature is June 9.

“The Model Code of Conduct shall come into force with immediate effect in the district(s) in which the whole or any part of the Parliamentary/Assembly constituency going for election is included, subject to partial modification as issued vide Commission’ s instruction No. 437/6/1NST/2016-CCS, dated June 29, 2017.”

The EC also said that the published Electoral Rolls for the aforesaid Assembly Constituencies with reference January 1, 2022 will be used for these elections.

The poll panel has decided to use EVMs and VVPATs in the bye-elections in all the polling stations. Adequate numbers of EVMs and VVPATs have been made available and all steps have been taken to ensure that the polls are conducted smoothly with the help of these machines.

The Electoral Photo Identity Card (EPIC) shall be the main document of identification of a voter, however, Aadhar or MNREGA job cards, passbooks with photograph issued by Bank/Post Office, Health Insurance Smart Card issued under the scheme of Ministry of Labour, Driving License, PAN Card, Smart Card issued by the RGI under NPR, Indian Passport, Pension document with photograph, Service Identity Cards with photograph issued to employees by Central/state govt/PSUs/Public Limited Companies, and official identity cards issued to MPs/MLAs/MLCs can also be used for identification.

Covid-19 guidelines issued by competent authorities will be strictly followed and social distancing and use of mask, sanitisers, thermal scanning, face shield, hand gloves, etc., as per Covid-19 protocol, will have to be complied with.