Can resolve all problems with Modi at helm in India: Bangladesh PM Sheikh Hasina 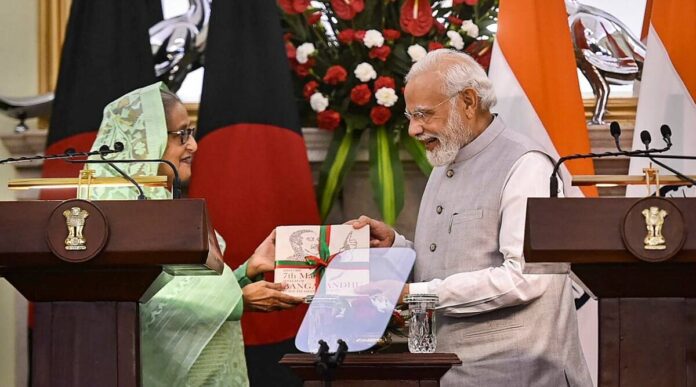 As long as Prime Minister Narendra Modi is around, New Delhi and Dhaka will find a solution to all bilateral problems, including the Teesta River water-sharing issue, visiting Bangladesh Prime Minister Sheikh Hasina said Tuesday.

Speaking after a meeting with Modi in Delhi, Hasina said: “…both the countries have achieved remarkable progress in a number of areas, I recall that the two countries have resolved many outstanding issues in the spirit of friendship and cooperation and will hope that all outstanding issues including the Teesta water-sharing treaty would be concluded at an early date.”

“Today, I thank Mr Modi that we resolved the issue of Kushiyara… So, I know as long as Prime Minister Modi is here, Bangladesh and India will resolve all these problems,” said Hasina with Modi by her side.

Earlier in the day, she had said with friendship one can solve any problem.

After the two sides signed a pact on water-sharing on the Kushiyara river, Modi said the agreement will benefit people in southern Assam and Sylhet in Bangladesh. He also said that the two countries will share data on floods.