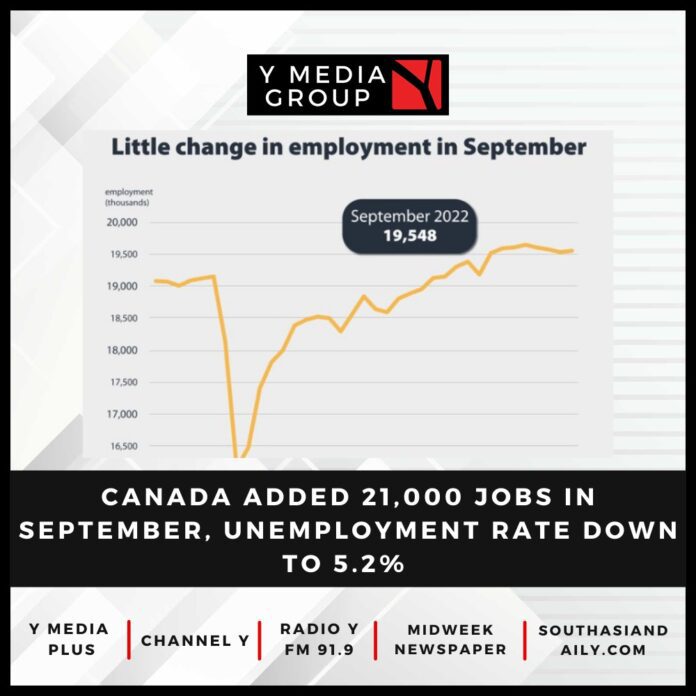 After dropping in August, employment was little changed (+21,000) in September, with both full-time and part-time work holding steady.

Employment declined for a second consecutive month among young women aged 15 to 24, but increased among male youth and core-aged women in September.

Gains in educational services and health care and social assistance were offset by losses in manufacturing; information, culture and recreation; transportation and warehousing; and public administration.

The number of employees in the public sector rose in September, partially offsetting declines recorded in July and August. Employment was little changed among employees in the private sector and among self-employed workers.

Employment increased in four provinces, led by British Columbia, while there were fewer people working in Ontario and Prince Edward Island.

Year-over-year wage growth remained above 5% for a fourth consecutive month, with the average hourly wages of employees rising 5.2% (+$1.57 to $31.67) compared with September 2021 (not seasonally adjusted).

After increasing in August, unemployment rate declines in September

After increasing 0.5 percentage points to 5.4% in August, the unemployment rate dropped to 5.2% in September.

The adjusted unemployment rate—which includes people who wanted a job but did not look for one—was little changed.

While the employment rate among core-aged mothers was at a record high in September, those with a child under 16 were twice as likely (14.9%) to have decided not to apply for a job or a promotion over the previous 12 months than their male counterparts (7.1%).