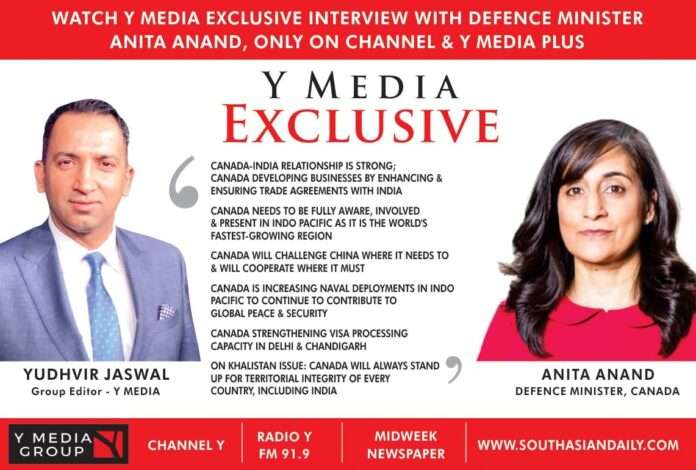 On the new Indo-Pacific policy, Minister Anand told Y Media, “the global environment is evolving. The Indo-Pacific is the world’s fastest-growing region and is home to six of Canada’s top 13 trading partners. Many Canadians, including me, have roots in the area. One in five immigrants to Canada was born in India alone. From a domestic person-to-person standpoint and an economic perspective, we need to be fully aware and involved and present in the Indo-Pacific.”

When asked how Canada is dealing with China, Minister Anand said Canada “will challenge China where it needs to, and cooperate where it must. Canada must and will take this very seriously, including from a defence perspective.” She further added Canada is increasing naval deployments in the Indo-Pacific to contribute to global peace and security.

On Canada-India’s growing relationship, Minister Anand said, “India is becoming the world’s most populous country, and it is looking to expand its commercial relationships, especially in the area of food, technology and energy. Canadian businesses and diaspora are looking to ensure that trade relationships can grow.’
Canada is developing those businesses by enhancing and ensuring a trade agreement with India.

“We are moving towards a Comprehensive Economic Partnership Agreement with India by ensuring we have a Canada-India desk within the Trade Commission service to facilitate questions and reach out to Canadian businesses,” Minister Anand told Y Media.

Minister Anand confirmed that Canada is strengthening visa processing capacity in Delhi and Chandigarh by investing nearly $2.3 billion over the next five years.

You can watch this exclusive interview only on Channel Y Bell 828, Telus 2418, Rogers 857, Ignite 707 and Y Media Plus. For more information, you can also visit our website, southasiandaily.com or ymediaplus.com. Follow us on our Twitter and Facebook pages: Y Media, to stay updated with the latest events. Read our ‘Midweek’ newspaper published every Tuesday, to know what is happening in Canada and worldwide.