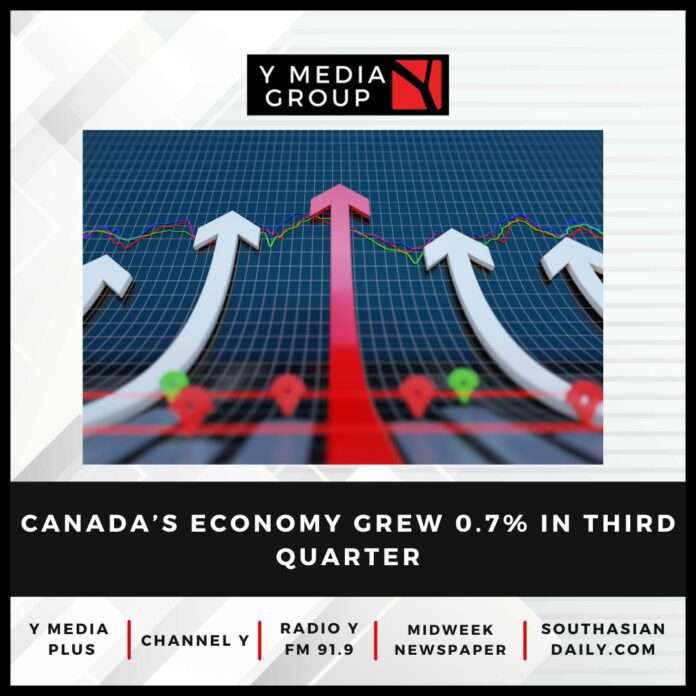 Real gross domestic product (GDP) rose 0.7% in the third quarter, the fifth consecutive quarterly increase. Growth in exports, non-residential structures, and business investment in inventories were moderated by declines in housing investment and household spending. Final domestic demand, composed of expenditures on final consumption and capital investment, edged down 0.2%, following a 0.6% increase in the second quarter.

Accumulation of non-farm inventories was $46.8 billion in the third quarter, a record high in additions to inventory. Inventories expanded among the manufacturing, wholesale trade, and retail trade sectors. Manufacturers experienced widespread inventory accumulation, while the retail and wholesale trade sectors recorded higher stocks of motor vehicles as the stock-to-sales ratio for this commodity continued to move upward after reaching historic lows in 2021. Other durable categories in wholesale showed strong accumulation as well, namely machinery and building materials.

Housing investment (-4.1%) declined for the second consecutive quarter, coinciding with higher interest rates. Renovations (-6.6%) were down for the second consecutive quarter, and resale activities (-13.8%) were down for the third consecutive quarter. These declines were partly offset by new construction (+2.4%), which rose after four quarters of decreases. Ontario, the western provinces, and Nunavut recorded increases in new housing construction, while the Atlantic provinces and Quebec posted decreases. On a nominal basis, housing investment represented 8.2% of GDP, a decline from the more than double digit proportion from early 2021.

Business investment in non-residential structures (+2.8%) continued to increase, a seventh consecutive quarter of growth. Investment in engineering structures rose 3.3%, led by continued investment on the Kitimat liquefied natural gas project in British Columbia and wind farms in Alberta. Additionally, there was a $64 million disinvestment in weapon systems assets in the quarter, reflecting the continued aid provided to Ukraine in the form of military equipment.

Household spending edged down 0.3% in the third quarter, the first decline since the second quarter of 2021. The decrease was mainly attributable to widespread declines in goods (-1.7%). Declines in expenditures on new trucks, vans and sport utility vehicles, furniture and furnishings, and pharmaceutical products were moderated by increased spending on new passenger cars and used motor vehicles.

Compensation of employees rises at a slower pace

Compensation of employees rose 1.2% on a nominal basis, as both employment and average earnings were up. Even so, this was the lowest growth in wages and salaries since the second quarter of 2020, when compensation declined sharply. This weakness was mainly due to slower wage growth in the goods-producing industry (+0.8%). The top contributors to overall wage growth were in the finance, real estate, company management (+3.6%), professional and personal services (+1.2%), and information and cultural (+5.0%) industries.

Manitoba (+2.2%) had the largest increase in compensation in the third quarter, followed by the Northwest Territories including Nunavut (+1.9%) and Ontario (+1.7%). Compensation in Newfoundland and Labrador (-0.7%) and Nova Scotia (-0.2%) decreased following relatively strong growth in the previous quarter.

At the end of September, tropical storm Fiona swept through the four Atlantic provinces and Quebec. This was the costliest and most destructive tropical storm to have hit Atlantic Canada; estimated insured damages totalled $660 million. Many residents of hard-hit areas were unable to attend work. However, wages from overtime work resulted in a net wage gain of $49 million in the affected provinces.

Household property income receipts, comprised of items such as interest and dividend incomes, were up 4.4%, fuelled by rising interest on deposits that reflected higher interest rates. At the same time, property incomes paid, which includes mortgage and non-mortgage interest expenses, rose 21.5%, as borrowing costs continued to climb. The Bank of Canada announced two increases to the policy rate in the third quarter, and the rate reached 3.25% in the third quarter from 1.5% at the end of the second quarter.

The gross operating surplus of financial corporations fell 2.3% in the third quarter of 2022, the fourth consecutive quarterly decline. However, this followed a strong 2021 in which the financial surplus rose 16.9% compared with 2020. Strong investment activity, equity markets, and lending in 2021 have cooled since the beginning of 2022.