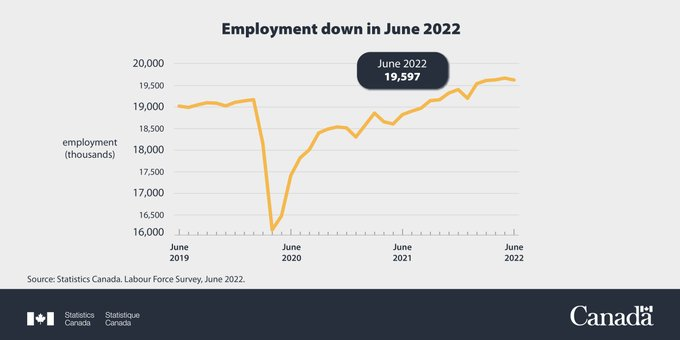 The employment loss was almost entirely due to a decrease among workers aged 55 and older. Across industries, a decline in the services-producing sector, particularly in retail trade, was moderated by gains in the goods-producing sector. At the provincial level, employment decreased in Newfoundland and Labrador and Quebec, while there were gains in Prince Edward Island and Manitoba.

Self-employment declined, while the number of employees in both the public and the private sectors held steady.

The number of self-employed workers fell by 59,000 (-2.2%), while the number of employees held steady in both the public and the private sectors.

Employment decreased in Newfoundland and Labrador and Quebec, while there were gains in Prince Edward Island and Manitoba.

Employment in the services-producing sector declined by 76,000 (-0.5%) in June, with losses spread across several industries, including retail trade.

In the goods-producing sector, employment rose by 33,000 (+0.8%) in June, with gains in construction and manufacturing.

The unemployment rate reached a new low of 4.9% in June, and the participation rate fell 0.4 percentage points to 64.9%.

The adjusted unemployment rate—which includes people who were not in the labour force but wanted to work—decreased 0.2 percentage points to 6.8% in June, the second consecutive record low.

Employment declines for the first time since January 2022

Employment fell by 43,000 (-0.2%) in June, offsetting the increase of 40,000 recorded in May. This marks the first employment decline not associated with a tightening of public health restrictions since the beginning of the COVID-19 pandemic.

Chart 1
Employment down in June

In the same way that employees may leave their job to start a business, every month some self-employed workers find work as employees. In the context of high job vacancies and accelerating wage growth, 5.0% of people who were self-employed in May became employees in June. This rate was similar to the transition rate in June 2021 (5.0%) and remained more than twice as high as the average rate recorded from 2016 to 2019 (2.4%) (not seasonally adjusted).

While both full-time and part-time employment were little changed in June, full-time work has increased on a cumulative basis over the last two months. Compared with April, full-time employment was up by 131,000 (+0.8%) in June, while part-time work was down by 135,000 (-3.6%). The involuntary part-time rate—the proportion of part-time workers who cannot find a full-time job—has continued to fall in recent months and reached a new record low of 14.0% in June, down from 19.4% in February 2020, before the pandemic.

In June, the proportion of part-time workers who could not find full-time work was above average among Latin American (25.7%), Chinese (21.7%) and Black Canadians (21.2%) (three-month moving averages, not seasonally adjusted).

In June, the employment rate—the proportion of the population that is employed—fell 0.7 percentage points to 62.5% among people aged 55 to 64. This decrease eliminated increases seen earlier in 2022 and returned the employment rate to a level on par with that observed through the second half of 2021. The employment rate among people aged 55 to 64 ranged from 50.7% among First Nations people living off-reserve and 52.1% among Southeast Asian Canadians, to 74.9% among Arab Canadians and 80.7% among Filipino Canadians (three-month moving averages, not seasonally adjusted).

In the core-working ages of 25 to 54, employment was little changed for both men and women in June, and the employment rate of both core-aged men (88.0%) and core-aged women (81.3%) remained at or just below the record highs reached during the spring.

Student employment continues to be above pre-pandemic levels in June

Alongside the elevated employment rate for youth, conditions continued to be favourable for students in the summer job market.

From May to August, the Labour Force Survey (LFS) collects labour market data on youth aged 15 to 24 who were full-time students in March and who intend to return to school full time in September. The May and June survey results provide the first indicators of the summer job market, especially for those aged 20 to 24, as many younger students aged 15 to 19 are still in school.

The unemployment rate reached a new historic low of 4.9% in June, down 0.2 percentage points from the previous record in May. The total number of unemployed workers fell by 54,000 (-5.1%) to 1.0 million.

With both employment and unemployment falling in June, the labour force participation rate—the proportion of the working age population who were either employed or unemployed—fell 0.4 percentage points from May to 64.9%.

The drop in labour force participation in June was not associated with an elevated number of discouraged searchers. There were 421,000 people who wanted a job but did not look for one, little changed from May. The adjusted unemployment rate—which accounts for this source of potential labour supply—decreased 0.2 percentage points to 6.8% in June, marking the second consecutive record low.

Employment in the services-producing sector declined by 76,000 (-0.5%) in June, with losses spread across several industries.

The largest decline was in retail trade (-58,000; -2.5%), erasing gains made earlier in the year. Data over the coming months will shed light on whether employment in this industry might be impacted by any changing consumer behaviours associated with inflation and Canadians’ ability to meet day-to-day expenses. Compared with 12 months earlier, there were 67,000 (+3.0%) more people working in retail trade in June.

The number of people working in construction grew by 23,000 (+1.5%), with Ontario (+19,000; +3.3%) accounting for the majority of the increase. This increase recouped losses observed over the previous two months. On a year-over-year basis, employment in construction grew at a faster pace (+8.0%; +118,000) than most other industries.

The sole industry in the goods-producing sector to see an employment decrease in June was natural resources (-20,000; -5.8%). Employment in this industry had been trending upward since December 2021, but the June decrease returned it to virtually the same level observed in June 2021. Employment in some components of this industry—such as the oil and gas extraction sector, and mining and forestry—may be particularly vulnerable to instability in global commodity markets.

Employment declines in Newfoundland and Labrador and Quebec, rises in Prince Edward Island and Manitoba

Employment declined in June in both Newfoundland and Labrador and Quebec, and it rose in Prince Edward Island and Manitoba. For further information on key province and industry level labour market indicators, see “Labour Force Survey in brief: Interactive app.”

In Newfoundland and Labrador, employment fell by 4,300 (-1.9%) in June, partly offsetting gains recorded in April and May. The unemployment rate was little changed at 9.9% while the labour force participation rate declined 1.2 percentage points to 56.5%.

Employment in Quebec fell 27,000 in June (-0.6%), the second decline in three months. The largest losses occurred in natural resources, as well as information, culture and recreation. There were notable gains, however, in professional, scientific and technical services, as well as manufacturing. Despite fewer people employed, the unemployment rate was little changed at 4.3% and continued to hover around a record low. In the Montréal census metropolitan area, both employment and the unemployment rate (4.7%) were little changed.

In Ontario, employment was little changed for the third consecutive month, while the unemployment rate fell 0.4 percentage points to 5.1%.

Quarterly update for the territories

Following gains in the fourth quarter of 2021 and the first quarter of 2022, employment in the Northwest Territories held steady in the second quarter. Over the same period, the unemployment rate was little changed at 4.5%.

In the Spotlight: Wage growth, work location, and working by necessity

The extent to which individual employees see their wages increase is influenced by a wide range of factors, including whether or not they are covered by a collective bargaining agreement or a union contract. While having union coverage can increase employees’ ability to negotiate larger wage increases, these increases can be delayed until collective agreements expire and a new round of collective bargaining begins. As of June, the average hourly wages of all employees who had union coverage were up 3.7% (+$1.21 to $34.32) on a year-over-year basis, compared with 6.1% (+$1.71 to $29.90) for employees who did not.

Recent differences in the wage growth of unionized versus non-unionized employees were reflected in differences in wage growth across industries in June, as none of the three industries with the highest levels of unionization recorded above-average annual growth. These three industries were health care and social assistance (+4.2%; +$1.23 to $30.68); educational services (+2.5%; +$0.89 to $36.73); and public administration (+2.5%; +$0.99 to $39.97). In contrast, in the professional, scientific and technical services industry, where fewer than 1 in 20 (3.8%) employees have union coverage, wages were up 9.9% (+$3.59 to $39.99) in June compared with one year earlier.

Despite the lifting of public health restrictions across the country, working from home and hybrid work arrangements continue to represent a key aspect of daily life at work for many Canadians. For some people who work from home, this may involve working in a different region, province or time zone from their colleagues or managers.

In June 2022, the proportion of workers who usually work all of their hours at home fell 1.3 percentage points to 17.9%. Compared with May, the prevalence of hybrid work—or working some hours at home and some at another location—increased by 0.4 percentage points to 6.7% (population aged 15 to 69; not seasonally adjusted). During the summer months, changes in work location may be partly due to the composition of employment, as many summer jobs are in industries such as accommodation and food services, where fewer workers are able to work at home.

In a context where job vacancies remain high, some businesses may continue to explore options to widen their recruitment pool and increase retention by allowing their employees to work from a different province or region.

In addition to self-employed workers who may interact with clients in other countries, Canadians who are employees and who work from home may also report to a worksite in another country, provided that their employer hires them through a Canadian subsidiary. As of June, when the LFS included questions on this topic for the first time, 2.6% (87,000) of employees who work most of their hours from home reported to an office or worksite located in a different country (population aged 15 to 69; not seasonally adjusted).

As Canada faces record-high retirements from an aging labour force in the context of a tight labour market, understanding whether older workers remain in the labour force by necessity or by choice may be helpful in designing strategies to mitigate downward pressure on labour participation.

New data from the LFS show that the proportion of older workers who are working by necessity rather than choice has changed little in the past two years. In February 2022 (the most recent data), more than half (55.4%) of people working past their 60th birthday were doing so by necessity—that is, for reasons such as paying for essential expenses or because they are not yet eligible for a pension. This was similar to the proportion in February 2021 (56.9%) and in March 2020 (56.8%), when this question was first added to the LFS (not seasonally adjusted).

In February 2022, working by necessity was more common among workers aged 60 and older with high school education or less (59.8%). Conversely, a slight majority (52.6%) of those with a bachelor’s degree or higher continued to work by choice—that is, for reasons such as paying for travel or other desirable items, or because they enjoyed working and were not ready to retire.

Since February 2022, labour market conditions have continued to tighten, potentially further supporting opportunities for older workers who want to stay employed by choice, and the pace of growth in consumer prices has accelerated, potentially putting pressure on others to stay employed out of necessity. Forthcoming data in the coming months will shed light on whether these changes have shifted the balance of necessity versus choice for this important group of workers.