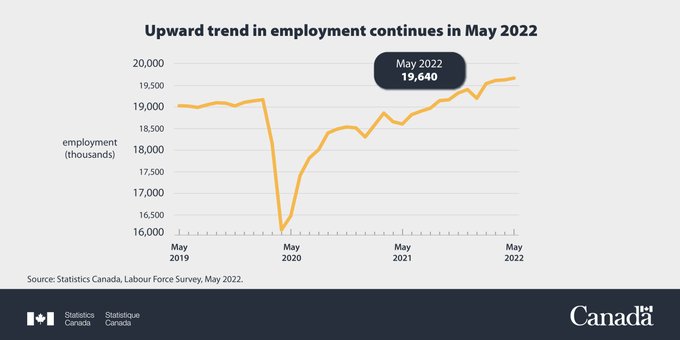 The employment increase was driven by gains in full-time work among young and core-aged women. The increase was spread across several industries, led by wholesale and retail trade, and was concentrated in Alberta.

Chart 1
Upward trend in employment continues in May

Employment increases in May

Employment in the services-producing sector rose by 81,000 (+0.5%) in May, with gains spread across several industries, including accommodation and food services.

Employment increased in Newfoundland and Labrador, Prince Edward Island, and Alberta. It declined in New Brunswick and was little changed in all other provinces.

The unemployment rate edged down 0.1 percentage points in May, reaching a new record low of 5.1%.

The adjusted unemployment rate—which includes those who wanted a job but did not look for one—fell 0.2 percentage points to 7.0% in May, the lowest rate on record since comparable data became available in 1976.

Among those in the core working ages of 25 to 54, the employment rate was up 3.1 percentage points on a year-over-year basis to 84.6% in May.

Absences due to illness or disability return to pre-pandemic level

The strong storm leading to prolonged power outages in some areas of Eastern Ontario and Western Quebec occurred on the last day of the reference week (Saturday, May 21) and did not impact hours worked in May.

Employment up in public sector, while self-employment still lagging below pre-COVID levels

The number of employees in the public sector rose by 108,000 (+2.6%) in May, driven by more public employees in educational services and health care and social assistance. The number of private sector employees fell by 95,000 (-0.7%), mostly due to fewer people working in manufacturing.

The unemployment rate edged down 0.1 percentage points to 5.1% in May, marking three consecutive months in which this key labour market indicator has reached a new record low. The rate was similar to or below previous all-time lows in four provinces: British Columbia (4.5%), New Brunswick (7.1%), Prince Edward Island (7.8%), and Newfoundland and Labrador (10.0%).

Among men aged 55 and older, the unemployment rate dropped 0.5 percentage points to 5.0% in May, while for women in this age group the rate was little changed at 4.1%.

Based on results from the Job Vacancy and Wage Survey, the ratio of unemployed people to job vacancies reached an all-time low of 1.2 in March (not seasonally adjusted), highlighting labour supply pressures facing employers seeking to attract and retain employees.

One potential source of labour supply is those who are not actively participating in the labour force but report that they want to work. In May, there were 409,000 of these potential workers, down by 18,000 (-4.2%) from April. The adjusted unemployment rate—which includes those who wanted a job but did not look for one—fell 0.2 percentage points to 7.0% in May, the lowest rate on record since comparable data became available in 1976.

There were 208,000 people who had been searching for work or on temporary lay-off for 27 weeks or more in May, little changed for the third consecutive month. While many leading labour market indicators have recovered to pre-pandemic levels, long-term unemployment has remained elevated and accounted for 19.7% of all unemployment in May, up from 15.6% in February 2020.

The overall labour force participation rate, or the proportion of the population aged 15 and older that is either employed or unemployed, held steady at 65.3% in May.

Participation rate down among men aged 55 to 64

As the labour force ages and a large cohort of Canadians approaches retirement, the labour force participation rate among 55 to 64 year olds (66.1%) is an important indicator of labour supply, particularly in the context of high unmet demand. While the participation rate (60.4%) was little changed for women aged 55 to 64 in May, it fell a full percentage point to 71.9% for men in the same age group.

Among adults aged 55 to 64, the participation rate in May ranged from 50.7% among First Nations people and 55.4% among Southeast Asian Canadians, to 76.6% among Black Canadians, 78.7% among Arab Canadians, and 82.3% among Filipino Canadians (three-month moving averages, not seasonally adjusted).

Employment in the services-producing sector rose by 81,000 (+0.5%) in May, with gains spread across several industries.

Employment held steady in construction in May, after falling in April. Employment in the industry had been trending upward from November 2021 to March 2022, and was up 5.3% on a year-over-year basis in May.

Chart 5
Employment in goods-producing sector falls in May

Employment up in two Atlantic provinces and in Alberta

Employment increased in Newfoundland and Labrador, Prince Edward Island, and Alberta in May. It decreased in New Brunswick and was little changed in all other provinces. For further information on key province and industry level labour market indicators, see “Labour Force Survey in brief: Interactive app.”

In Newfoundland and Labrador, employment rose (+4,100; +1.8%) in May, the third increase in four months. Whereas the provincial unemployment rate (10.0%) remained the highest among all provinces, the rate for the census metropolitan area (CMA) of St. John’s was 6.8% (three-month moving average).

New Brunswick was the lone province with a drop in employment in May (-3,900; -1.0%), partially offsetting gains in March and April. The unemployment rate was little changed at 7.1%.

In Quebec, employment was little changed in May, following a decline in April, as growth in full-time employment was offset by part-time losses. With more people participating in the labour market and little employment change, the unemployment rate rose 0.3 percentage points to 4.2%.

In Ontario, both employment and the unemployment rate (5.5%) held steady for the second consecutive month in May.

The unemployment rate, adjusted to US concepts, was 4.1% in Canada in May, 0.5 percentage points higher than in the United States (3.6%).

In the spotlight: wage growth, student employment, and work location

In recent months, the tightening labour market and rising inflation have highlighted the importance of a range of wage indicators for understanding whether the paycheques of Canadians are keeping pace with the rising cost of goods and services. Average hourly wages for all employees rose 3.9% (+$1.18) on a year-over-year basis in May, up from 3.3% in April. Faster increases were seen among some groups of workers. For example, wages increased among both permanent (+4.5%) and full-time (+4.3%) employees.

Year-over-year growth in average wages also differs between men and women. In May, average wages were up 4.2% year over year among men, compared with 3.7% among women. This difference has narrowed since the beginning of 2022, as wages among men held steady from January to May, while wages among women grew by 1.2%. Year-over-year wage growth among both men and women was slower than the pace of growth in the Consumer Price Index (CPI) as of April (+6.8%).

Understanding the dynamics of wage changes—and their relationship to rising consumer prices—requires a range of indicators above and beyond average hourly wages from the Labour Force Survey (LFS), including indicators from the Job Vacancy and Wage Survey (JVWS). For example, from March 2019 to March 2022, recently-hired employees saw wage gains (+16.5%) which were greater than both the CPI (+10.0%) and the average for all employees (+12.4%), in part a reflection of some job changers having above-average work experience and earning power. On the other hand, from the first quarter of 2019 to the fourth quarter of 2021, the offered wages associated with vacant positions (+5.3%), measured in the JVWS, grew more slowly than the CPI, suggesting limits in the ability of some employers to raise pay levels. For more information on a range of wage indicators, see “Disaggregating wage growth: Trends and considerations.”

Other sources can shed further light on how employers plan to adapt to changing consumer prices. For example, according to the Canadian Survey on Business Conditions, over half of businesses (55.2%) in the second quarter of 2022 expect inflation to be a bigger issue when discussing wage increases with employees over the next 12 months, including over three-quarters of businesses in accommodation and food services (not seasonally adjusted). In early 2022, over 4 in 10 businesses (44.9%) indicated that they plan to increase wages offered to existing employees over the next 12 months (not seasonally adjusted).

During the summer months, from May to August, the LFS captures labour market information for youth aged 15 to 24 who were full-time students in March and intend to return to school in September. This information helps to shed light on the experiences of returning students seeking to gain work experience and to fund their continuing education. Youth in general have been hard-hit by employment disruptions throughout the pandemic, with young women in particular not recovering their February 2020 employment level until August 2021.

Returning students aged 15 to 24 benefitted from favourable labour market conditions in May, with nearly half (49.8%) being employed. This was 2.8 percentage points higher than before the COVID-19 pandemic in May 2019 (47.0%) and well above the level in May 2021 (39.5%), when students seeking to pay for their fall studies continued to face labour market challenges resulting from COVID-19.

Among female returning students, the May employment rate (53.3%) was 1.5 percentage points higher than the previous record high for the month of May, observed in 2019. Similarly, the unemployment rate for this group was the lowest May rate on record, at 10.2% in May 2022.

Student employment rates tend to increase through June and July, as more youth—particularly teens—finish their school year and enter the labour market.

Among returning students, average hourly wages for employees were up 5.7% year over year (+$0.90 to $16.82) in May, including a 10.5% year-over-year increase in wages for students working in the accommodation and food services industry (+$1.52 to $15.99). Wages for students in this industry were likely impacted by increases to minimum wages introduced by several provinces in 2022, and the elimination of the special minimum wage for liquor servers in Ontario in January 2022.

As of May, just under 1 in 5 (19.2%) employed Canadians reported that they usually work exclusively from home, similar to the proportion in April. The proportion of workers with a hybrid work arrangement—that is, those who usually work both at home and at locations other than home—increased slightly in May (+0.5 percentage points to 6.3%), continuing a slow upward trend observed since January (population aged 15 to 69; not seasonally adjusted).

With the lifting of most COVID-19 public health restrictions in the past few months, and in the context of increased competition for a limited supply of labour, many employers have been faced with the choice of whether to require employees to return to the office, or to provide them the option of continuing to work from home, either exclusively or in combination with some in-person work. In May, 27.9% of employees reported that they were able to choose their work location at least some of the time, including 13.9% who were able to choose all of the time (population aged 15 to 69; not seasonally adjusted).

The flexibility of employees to determine their work location at least some of the time was highest in professional, scientific and technical services (64.3%) and finance, insurance, real estate, rental and leasing (57.4%) (population aged 15 to 69; not seasonally adjusted).

Among employees who were able to choose their work location at least some of the time, 45.0% reported that they work exclusively from home, while 1 in 6 (15.7%) had a hybrid work arrangement.