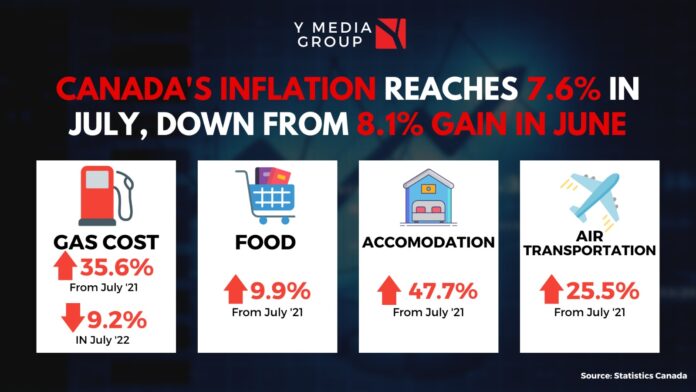 The Consumer Price Index (CPI) rose 7.6% on a year-over-year basis in July, down from an 8.1% gain in June. The deceleration was a result of slower year-over-year growth in gasoline prices.

While gasoline prices declined on a monthly basis in July, prices for other non-durable goods like natural gas and groceries rose. Price increases for in-person services such as flights, restaurant meals and hotel stays contributed to the month-over-month increase.

Gasoline prices rise at a slower pace year over year

Gasoline prices rose 35.6% year over year in July after a 54.6% increase in June. Consumers paid 9.2% less for gasoline in July compared with the previous month, the largest monthly decline since April 2020. Ongoing concerns related to a slowing global economy, as well as increased COVID-19 pandemic public health restrictions in China and slowing demand for gasoline in the United States led to lower worldwide demand for crude oil, putting downward pressure on prices at the pump.

On a monthly basis, gasoline prices fell the most in Ontario (-12.2%), where the provincial government temporarily lowered the gasoline tax.

Prices for groceries rise at a faster pace year over year

Prices for food purchased from stores increased more on a year-over-year basis in July (+9.9%) than in June (+9.4%). Prices for bakery products (+13.6%) continued to rise at a faster pace as wheat prices remained elevated. Higher input costs and global supply uncertainty related to the Russian invasion of Ukraine continued to put upward pressure on global wheat prices amid an already constrained supply.

Prices for flights, hotel rooms and dining out continue to rise

Prices for various services associated with travel and in-person gatherings continued to increase during the busy travel season, the first summer since the loosening of COVID-19 public health restrictions across Canada.

Airfares rose 25.5% in July compared with the previous month, in the wake of strong demand for flights. Similarly, Canadians paid 24.8% more for travel tours, largely driven by travel to destinations in the United States.

Traveller accommodation prices rose 47.7% in July compared with the same month a year earlier, with prices rising the most in Ontario (+70.0%).

Year over year, prices for food purchased from restaurants (+7.3%) continued to increase at a faster rate in July compared with June.

On a year-over-year basis, the mortgage interest cost index (+1.7%) increased for the first time since September 2020 amid elevated bond yields and a higher interest rate environment.

In the context of higher mortgage rates, which could lead to additional rental demand, rent increased 4.9% in July compared with the same month in 2021, following a 4.3% increase in June. Faster price growth in the rent index was largely driven by acceleration in Ontario (+6.4%) and Alberta (+3.4%).

On a year-over-year basis, prices rose less in July than in June in eight provinces.

Natural gas prices in Canada rose at a faster pace year over year in July (+42.6%) compared with June (+26.0%), driven primarily by price increases in Ontario (+45.3%). This followed the Ontario Energy Board’s approval of rate increases, which came into effect on July 1, amid sustained global demand for natural gas and uncertainty in global energy markets.

Year over year, Albertans paid 18.0% less for electricity in July, following a 35.6% increase in June, as a result of a provincial rebate beginning in July. This was the first decline in electricity prices in the province since December 2020.